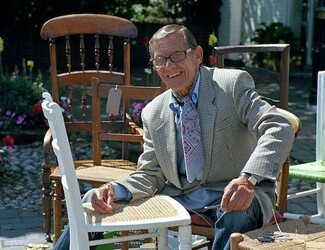 I first met John Lee just over two years ago.  He was caning chairs on the streets of Lewes in Sussex, and a friend of mine had asked him to cane one of hers.  When he went to pick it up, he started to tell her about his life.  She thought it was so unusual it would make a good book and told John she knew a journalist (myself) who might be able to write it for him.  I was curious and thought I should meet him.  I invited him to cane one of my chairs and we had a chat.

The more he told me, the more I felt his story should be told and that I wanted to write about him.  Well, not about him but to let John tell his story in his own words.  I decided to record each session so John’s voice would come through strongly.

He came to see me about every two weeks and we started at the beginning.  He told me  how his mother, a Romany Gypsy, had married a French travelling salesman and broken his Romany blood line,  and how he’d been brought up by his grandparents.  He explained how the circumstances of his birth had had a huge impact on his life - his grandparents told him he would never be able to marry a Gypsy girl or, when they died, live on a Gypsy site. It was his Italian grandmother who taught him to cane chairs and he was earning a living doing this on the streets of London when he was thirteen.

His story emerged gradually. He told me how, as a child, he slept under the family vada on a bed of straw with two lurchers to keep him warm, how his grandfather, an early riser,  would come round at five in the morning, winter and summer, and say ‘come on boy. Get your pyjamas off,’ and drop him into one of the big water barrels which was always very cold.  He told me how he had only one day at school before walking out of the classroom and how, when he was seventeen, although unable to read or write, he got a job as a waiter on a cruise ship. Over the years, he ran a building company, seven greengrocers and a restaurant in Spain.

There is a moving account of his Gypsy wedding.  He did have one despite what his grandparents had told him would not be possible.  When he was about 23, the Elder on the site where he was living, asked him if he would marry his daughter who didn’t have long to live.  She had always wanted a Gypsy wedding, her father said, and so had John.  They did get married and danced round the fire with five broomsticks, and she died a few months later in his arms. He told me about Jennifer, the rich woman he met when he was caning chairs on the King’s Road in Chelsea and how she had invited him to go to the opera. He didn’t know what opera was and there’s an amusing account of how he coped with the situation. They were together for 25 years until she died. It was only after their first year together that he confessed he couldn’t read or write and she sent him off to a tutor to learn.

Sometimes John would tell me about an episode of his life and I would ask him when it happened?  Does it matter, he would say and I’d say yes it did – we had to have some chronological sequence!  After each session, I would type back the interview and put it in some sort of order. Later, when I got to the stage of proof reading and finalising the book, publication got held up because I wanted to make sure everything was as accurate as possible. John said he couldn’t see why spelling or punctuation mattered. It was the story that was important, he said.  This was one of our few disagreements!  I told him, we had to check facts as well, like the names of London streets, and sometimes his memory did play him false.  Remembering, for example, some musicians he’d heard whom he couldn’t have done – they were in the wrong place or at the wrong time!

Writing the book has been a learning experience for me: about the gypsy language and traditions, their way of life though some of that has changed since John was a boy.  I was pleased that John seemed happy to speak of episodes he probably hadn’t thought about for a long time and that he had trusted me to portray him accurately.

I think what struck me most strongly was that, despite all the challenges he has had to face, he has always remained passionately loyal to his Romany traditions.