Travellers' Times will be bringing you a series of blogs from GATEHerts this week, following the  journeys of UK participants who attended the international youth event 'Dikh He Na Bister'  (Look and don’t forget)

Today, Lucy Hetherington Communications Officer at Friends, Families and Travellers, shares her thoughts on the first day of the unique event that brings 300 young Roma and non-Roma from across the world together to learn about the Roma genocide and mechanisms of anti-gypsyism.

Check out the short film above to hear more from Lucy and other participants from across Europe. The film was made by Sejnur Memiši a Roma filmmaker and facilitator of Dikh He Na Bister 2018.

We met with group members from other countries, introduced ourselves, our backgrounds and started to get to know each other better. The range of experience in the room was wonderful: teachers, students, people who had been activists for years and people who hadn’t considered calling themselves activists yet. We found ways to converse between ranges of first languages. Fortunately there were some in the class who had the gift of many tongues and were able to offer their support translating.

We spent the day discussing what we knew about discrimination, recognition, the holocaust and other concepts which we would continue to learn about through the week. We watched videos which could only briefly touch on the depth and history of Romani culture. 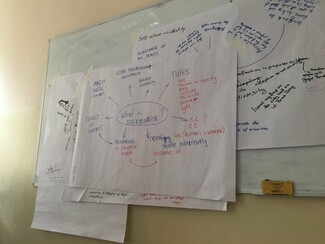 On that first day, I realised how very little I knew and was very excited for the opportunity to learn more from both the facilitators and the other participants over the week. We learned a little about the ongoing persecution of Romani people through history in the knowledge that there would still be so many stories, events and struggles to hear about.

We spoke of the historical and ongoing difficulty in finding safe places to settle when Romani, Gypsy and Traveller communities continue to be subject to discrimination, violence and displacement. But not only of these difficulties and troubles, we learned about the beauty of the different cultures, the music, dance, art and the ongoing fight for recognition, for rights and for freedom. 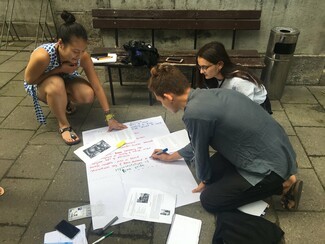 For the first time, I heard of the song “Gelem, Gelem” by Žarko Jovanović or as he later called it ‘Opre Roma’. The song is a Romani anthem, translated in many countries by Roma to their local dialect. It was written after surviving the holocaust and has long proved as an anthem to unite Roma from around the world.

“Up, Romani people! Now is the time, Come with me, Roma from all the world”.

We discussed landmark moments in history, for example, the fact that the Nazi genocide of Roma and Sinti wasn’t recognized in Germany until 1982, when on March 17th the Former Chancellor of West Germany, Helmut Schmidt, declared:

“The Nazi dictatorship inflicted a grave injustice on the Sinti and Roma. They were persecuted for reasons of race. These crimes constituted an act of genocide.”

It was shocking to comprehend that the deaths of potentially over 1 million Roma were not seen as an act of genocide until the 80s. I felt for their relatives, having to fight for too long to gain recognition.

As the afternoon closed, we prepared ourselves within the group for the next day when we would go to Auschwitz. We looked at photographs and paintings of symbolic events to ensure we were able to support each other through, what would be, a heart wrenching yet insightful day. 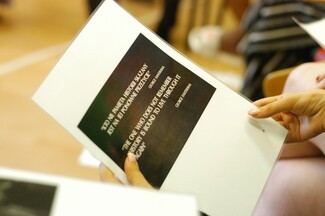 Look out for Dikh He Na Bister reflections Part 2 tomorrow by Joseph Mitchell.