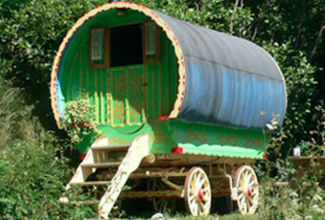 Every year at Xmas and New Year, the law bloggers choose a case from the past which remains important to this day. Here is this year’s case.

The Criminal Justice and Public Order Act (CJPOA) 1994 gave draconian eviction powers to the police and local authorities (especially sections 61, 77 and 78) and repealed the duty to provide sites. When the CPOA 1994 was brought into force lots of Gypsies and Travellers and their representatives were concerned that those who were having to resort to roadside encampments due to the lack of authorised pitches would be driven into housing.

Detailed  analysis  of [passages  from  the Circular 18/94]  and debate  about  what legal force, if any, an advisory circular  of this  kind  possesses has been made  unnecessary by the realistic  concession of counsel for both  local authorities that whether or not they were spelt out in a departmental circular the matters mentioned ... would be material considerations in the public law sense  that to overlook them  in the exercise of a local authority’s powers under sections 77 to 79 of the Act of 1994 would be to leave relevant matters out of account and so jeopardise the validity of any consequent step. The concession is rightly made because those considerations in the material paragraphs which are not statutory are considerations of common humanity, none of which can be properly ignored when dealing with one of the most fundamental human needs, the need for shelter with at least a modicum of security. ((1995) 8 Admin LR 529 at 535.)

Over the years the Atkinson case (ultimately approved by the Supreme Court in Manchester City Council v Pinnock) has helped those representing Gypsies and Travellers ensure that local authorities take account of welfare considerations and all government policy on the management of unauthorised encampments before deciding whether to evict an encampment and especially that they take account of ‘considerations of common humanity’. The Atkinson case shows just how important the law can be in protecting the human rights of Gypsies and Travellers.

Marc Willers and Chris Johnson, co-editors of the Legal Action book Gypsy and Traveller Law, are hopeful that the third edition will be launched in the first half of 2018.

Willers QC (marcw@gclaw.co.uk, @mwillers1) specialises in representing Gypsies and Travellers and is a member of the Romani Gypsy and Traveller Team at Garden Court Chambers (@gardencourtlaw, www.gardencourtchambers.co.uk).