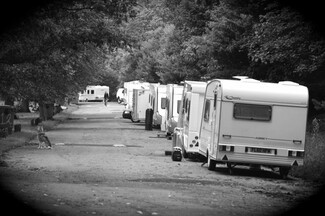 Sabrina McDonagh, The Travellers’ Times Advocate and Gypsy Traveller community campaigner reflects on domestic violence, drawing on her own experience and of the Traveller women she has talked to.

Within many Traveller families or groups, it is not always possible for a woman to step up and seek support or help from her immediate friends, family and acquaintances as more often than not, there is a backlash effect on them taking action. If they speak out they may – in some communities – get ostracised.

I can understand and empathize with any woman – or men because some men are victims too, though it is rare - who go through abuse, as it can come in many forms, including  physical verbal, psychological and more.

But is ‘grabbing’ abuse? My opinion on that is no, it is not.

For those who don’t know, ‘grabbing’ is where a boy literally grabs a girl to get a kiss, and this often leads to courting and marriage. It’s very important that people know that nine out of ten times the girl being grabbed actually wants to be grabbed, the boy and her know that, and there is always someone there so there is no foul play intended.

Not all Travellers believe in the ‘grabbing’ and a lot are very much against it – but it happens. Consensual ‘grabbing’ is not abusive or domestic abuse.

Of course, not all Traveller men abuse, hit and shout at their partner - there are many more happy and supportive relationships than there are abusive ones. Within The last ten years I have seen more and more Traveller men become involved in cleaning and looking after children while the wife's are resting or shopping or working. That alone makes a bold statement - which Traveller men are moving forward with the times and see their woman as equals rather than subservient.

All this being said, domestic abuse still happens and one of the reasons it does is because the perpetrators are allowed to get away with it by those around them. A lot of Traveller woman victims actually need help to get out of the environment in which abuse is happening – say a family site or house - but have a fear that if they tell the police, they will be branded an informer and socially excluded from their family and kinship network. Also if they have children and the police are involved then they then have social workers on their case. The majority of Travellers don't have good relations with social workers, this stems back partly past history and also because too many Gypsy and Traveller children are inappropriately taken into care at the first sign of trouble, instead of the family being supported.

Then there are other factors such as psychological manipulation and threats, where the man says that if she's leaves then she won’t be able to be with anyone else again and her name will be scandalised. This is not always the case as my own experience of settling down with another Traveller man and now having another baby boy shows.

Reprisals from the husbands family is a major concern as well, so fleeing an abusive situation can seem extremely daunting.

Because of these factors – some of them unique to Traveller communities – it is important for services trying to help Traveller women who suffer from domestic violence tailor their help so that the needs of the victims are best met.