Jimmy Carr – Not getting away with it 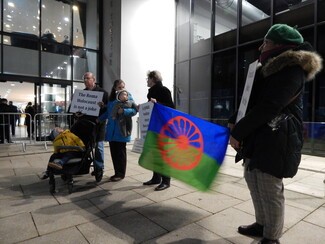 When the Jimmy Carr show came to their local theatre yesterday, Luton Roma Trust where there to make their feelings clear – that jokes about the Holocaust targeting the Roma victims were not acceptable.

In his Christmas special called ‘His Dark Material’ and broadcast on Netflix, Jimmy Carr joked about the suffering of the Roma in the Holocaust, calling it a positive. A clip of the joke came to light when it was uploaded to social media last week and went viral, drawing almost universal condemnation.

So, last night the Luton Roma Trust and supporters, including the Travellers' Times Editor and the Revd Rachel Phillips rector of a local church, gathered in the biting wind outside the Grove Theatre, Dunstable, with placards and a Romani flag. As we stood there a sell-out crowd filed past to fill the 780 seat venue to see the comedian who prides himself on his “offensive” material. We were there to make our views known, to support the local Roma community, and to remember the Roma and Sinti victims of the Holocaust.

Some of the audience waiting to go in were pretty offensive themselves, with one young man glaring at us and squaring his shoulders as he repeatedly kicked one of the crowd control barriers less than five feet away from our vigil. A couple of people came up to talk to us. One older friendlier man said 'I know he's said something, what was it?' We told him and he didn't laugh - he winced. A few punters waiting to go in allowed themselves to be interviewed by a local BBC crew that had turned up. Most of the rest just looked away. 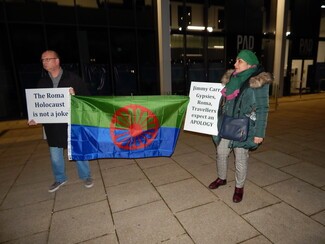 “We appreciate that comedy is subjective but, in our view, when punchlines are indistinguishable from the genuinely-held views of fascists and Neo-Nazis, a line has very clearly been crossed,” say Luton Roma Trust, who estimate that from 2,000 to 4,000 Roma live in and around Luton and Dunstable. The small charity provides support to this community, like helping with housing, council forms, health service support, translation services, job applications and UK settlement papers post-Brexit.

The Luton Roma Trust had three demands: That Jimmy Carr should apologise, for Netflix to remove this segment from the programme and that the Grove Theatre must seek and provide a public assurance that his gross racial slur must not be repeated in his performance at the Grove Theatre. 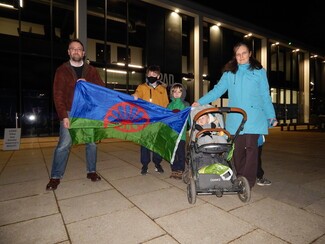 Luton Roma Trust's Paul and Stephanie Sayer with their children (from tallest to smallest) Arran, Aidan, Kieran and Finlay

They received the assurance that Carr’s “gross racial slur” would not be repeated by a roundabout route through the local council, which part manages the Grove Theatre alongside Stevenage Leisure Ltd.

Spotting this the day before the show, the Travellers’ Times approached Central Bedfordshire council for comment. A Central Bedfordshire Council spokesperson replied to us calling on Jimmy Carr to apologise and saying that they had sought assurance from his management that the "gross racial slur" would not be repeated.

“The recent comment about the Holocaust made by Jimmy Carr in his Netflix show is deeply disturbing,” added the council spokesperson. “We appreciate comedy is subjective and making light of differences can be funny however, Jimmy Carr’s recent mocking the atrocities of the Holocaust goes beyond humour and is unacceptable and we call on him to apologise.” 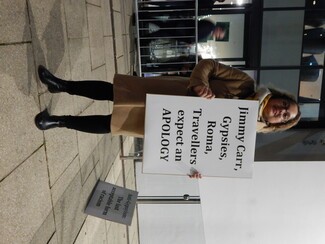 In a rather-mealy mouthed statement released by the Grove Theatre management, a spokesperson from Stevenage Leisure Ltd said that the Jimmy Carr show booking was made “long before the recent comments came to light” and that they did not “condone the comments”.

“We do not condone the comments made by Mr Carr and have been assured by his tour management that ‘The show is brand new and does not repeat any material from Jimmy’s recent Netflix special His Dark Material”, they added.

“Any customers attending should be aware that Jimmy’s material could cause offence.’

“As a receiving house Theatre, the Grove has no direct control of artistic content but we have spoken at length with the production company.”

Luton Roma Trust now hope that similar protests and vigils will spread as the Jimmy Carr show arrives at venues in towns and cities across the UK and the Republic of Ireland throughout 2022. 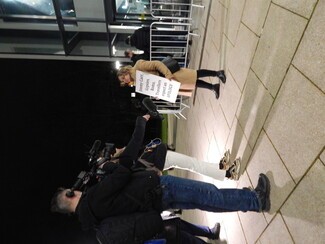 Crinna being interviewed by the BBC

Jimmy Carr – Not getting away with it

Judging by his recent comments, Carr seems to see himself as some kind of brave campaigner against ‘cancel culture’. At his first performance after his Holocaust quip went viral, at the Whitley Bay Playhouse, Carr seemed to address the furore over by saying, “I’m going to get cancelled, that's the bad news. The good news is I am going down swinging.”

Yet Carr is not brave at all. Neither is he some ‘anti-cancel culture' warrior. Carr targeted one of the most vulnerable ethnic minorities in Europe because he probably thought that he could then add a Holocaust joke to his deliberately offensive repertoire of sneers and get away with it, unlike if he had targeted other more well-known groups, like the Jews, who were also murdered by the Nazis and the Fascists.

Carr has also claimed that his jokes are ‘educational’. What we at the Travellers’ Times have learnt is that Jimmy Carr is a coward.