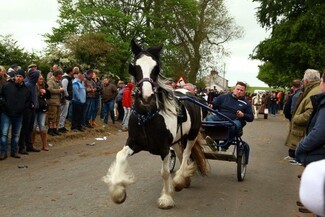 A decision on a potential late-summer date for Appleby Horse Fair has been delayed until mid-April, organisers say.

Appleby Horse Fair Multi-Agency Strategic Co-ordinating Group (MASCG) met earlier in the week to discuss the 2021 Fair. The decision as to whether to go ahead with a new date later in the summer was on the table. However, that decision has now been pushed back until the next meeting in mid-April.

Chair of Appleby Horse Fair MASCG and Deputy Chief Executive of Eden District Council, Les Clark, said: “Today (29 March), the MASCG has considered the public health, resourcing and community relations aspects of a number of different alternatives regarding whether or not the Fair takes place this year.

“Another meeting will be held by the middle of April, following which we hope to be in a position to provide further clarity.”

“Our overarching aim is the safety of the public – including those attending and the settled community - and it is only right to properly consider all options before any formal decision is made.”

Meanwhile, the planning for some big pop festivals to take place later in the summer are in full swing, whilst some big-name festivals have already cancelled.

Gypsies and Travellers reacted with trepidation.

“Was looking forward to Appleby this year but the goal post seems to be getting further away from the decision to be made,“ posted Michelle on the popular Facebook group Keep Appleby Horse Fair Alive.

“We will get there, God is on our side,” posted Jack.