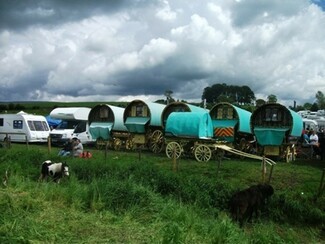 The Government will either criminalise unauthorised camps or ramp up existing police eviction powers for England within the next few months, it has promised in an official briefing paper published on New Years Eve.

"The Government is currently considering two proposals to reform the policing of unauthorised encampments. It is committed to either legislate for a new criminal offence or to strengthen the police powers,” the Government said.

The new proposals are for England only and will not be brought in by the Welsh and Scottish Governments.

The Government is considering making trespass a criminal offence when making an unauthorised encampment, it said, adding that the proposal “would not affect ramblers, the right to roam or rights of way”.

The other proposal the Government is looking at is the ramping up of existing police powers to evict and move on unauthorised camps. These amendments will be to the Criminal Justice and Public Order Act 1994 and will include:

The Government ran a consultation on both options in early 2020. It has not yet responded to the consultation. On 2 December 2020, Kit Malthouse (Minister for Policing and Crime) said:

"We made a clear manifesto commitment to act on the issue of unauthorized encampments and I remain determined to ensure police have the powers they need. I intend to publish our response to the consultation and to bring forward legislation later this session."

The proposal to criminalise trespass was first mooted by the Tories in the party’s 2010 general election manifesto.

“The vast majority of travellers are law-abiding citizens – but illegal sites often give an unfair, negative image of their community and cause distress and misery to those who live nearby,” said a Government source.

“There is a widespread perception that the law does not apply to travellers and that is deeply troubling.”

The moves are being opposed by Traveller organisations who claim they are more about electioneering than tackling any perceived problem and the TT understands that lawyers for Gypsies and Travellers are set to challenge any new laws in court.

The Friends, Families and Travellers (FFT) charity said that even the police did not believe the new criminal powers were necessary.

Responses to the Government’s consultation obtained by the charity under freedom of information (FOI) legislation, showed that 75 per cent of police responses indicated their current powers were sufficient and/or proportionate.

Additionally, 84 per cent did not support the criminalisation of unauthorised encampments, and 65 per cent said lack of site provision was the real problem.

Abbie Kirkby, advice and policy manager at FFT, said the proposed laws would make the lives of Gypsies and Travellers a misery.

She said: “The evidence we have collected shows that the Home Office are deliberately ignoring police views on unauthorised encampments. The timing of the consultation made it clear that the Government’s motive was to use Gypsies and Travellers to gather votes at election time.”