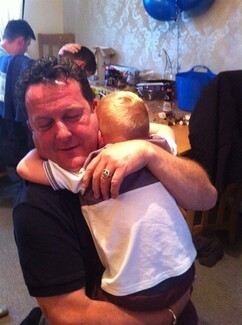 A Traveller man from Hampshire is set to walk a six day charity hike to raise money for the Samaritans following the death of his dad who took his own life earlier this year.

Father of three Tom Jones, 34, will walk 100 miles over the rolling hills of the South Downs from Winchester to Eastbourne. Tom’s walk will start on the 25th August and finish at Eastbourne Pier on the 30th August.

“My dad loved the outdoors and he was a charitable person. It just made sense to choose a mental health and suicide charity to raise money from my walk for,” says Tom.

“The Samaritans is for everybody and my dad was charitable to everyone and not just Travelling people.”

Tom’s dad – also called Tom Jones – was well known among the Travelling community for his singing and performances at Traveller weddings up and down the country. Tom Jones was also popular among his local community in Grayshott, Surrey, where he lived, for his charitable work and his “larger than life character” says Tom.

Tom Jones appeared to have everything to live for. He was a popular, talented and generous man with a loving wife, four children and three grandchildren – and a “have a go hero” who received a top award for bravery from Hampshire’s Chief Constable when he intervened in a robbery. Yet mental health problems can happen to anyone, says Tom.

“My dad suffered with mental health issues for a number of years,” says Tom.

“My dad lost three brothers from illness in succession from 2013 and he never really got over the death of his first brother, let alone the rest. And then in 2016 him and my mum where in a Lloyds bank in Liphook and there was an armed robbery and he got shot in the face whilst wrestling one robber to the ground and then stabbed in the chest by the other robber.”

After his heroic bravery Tom’s dad was left with a shotgun pellet lodged near his brain, on medication, and with post-traumatic stress symptoms.

“Dad hit the bottle really hard,” says Tom. “We tried really hard to save him but he was on a downward spiral.”

Tom has just made a fundraising page for his charity walk and has raised over £500 of a £3,000 target in three days.

Tom also hopes that the walk will bring some healing to his family which he says has suffered pain – and will be some healing for himself.

“It’s a bit of therapy for myself to get out in the open and reconnect with myself a little bit because I haven’t had the chance to do that since my dad’s death,” says Tom.

“If I can raise money to help saving other people’s lives and stop them going through the same pain that my family is still going through, then I’ve done my job.”

To see and donate to Tom’s fundraising hike for the Samaritans please click on this link: TOM'S SAMARITANS WALK FOR DAD PAGE

The TT believes that many Gypsy and Traveller families have been affected by suicide and we will be following and reporting on Tom’s charity walk in August. Our editor will also be making a personal donation - when he next gets paid. Thanks Tom – you are inspirational.

If you are affected by mental health problems and/or feeling suicidal, the Samaritans are always there at all times of the day and night to talk to you. Call 116 123. They do not discriminate.