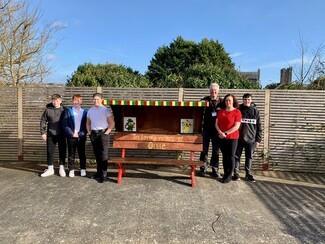 Gypsy Traveller pupils at the Monkton Priory Learning Centre in Pembrokeshire, Wales, have unveiled a touching memorial to one of their classmates.

Oliver Johnson died suddenly just over a year ago aged 12.

He was so popular that friends in his class were determined to honour his memory so they designed and built a covered bench illustrated with Oliver’s favourite Pokemon characters.

And last week it was unveiled at a ceremony in front of Oliver’s family, school pupils and staff as well as other members of the community

His mum, Mrs Melisa Johnson said: “It was a really lovely afternoon and the bench is a great tribute to Oliver” while his nan, Mrs Vonnie Jones, described it as “a buddy bench for all to share.”

She added: “The pupils in Ollie’s class designed, cut, painted and screwed every piece of wood together in memory of their friend.”

Rhod Rhodes of the Green Links Community Interest Company of Bush, Pembroke, who supervised the making of the bench, said the pupils were a pleasure to work with

He explained: “During its creation they have learned to measure, cut, drill and countersink and screw plugs, They are a ‘can do’ group who will have a go at any task.

“They also incorporated his favourite colours as well as the Pokemon characters into the design.”