Gypsies and Travellers get active against anti-Traveller encampment injunctions 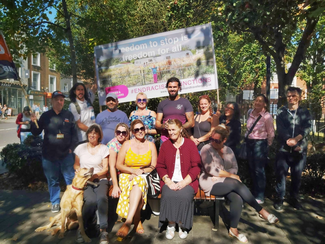 A London Gypsy and Traveller charity is set to launch a people-powered campaign to raise awareness about anti-Traveller injunctions after a landmark legal ruling.

London Gypsies and Travellers recently celebrated a High Court victory following a judgement that refused Bromley’s injunction against stopping on land in the Borough.

Over the past two years, over 30 councils – including 14 in London – have taken out similar borough “wide” injunctions which threaten 'persons unknown' with fines and imprisonment if they camp on open land within their boundaries.

Marc Willers QC, a legal expert on Traveller law, has called the injunctions, “the current most serious threat to the nomadic and travelling way of life.”

In the landmark ruling in the High Court in May, earlier this year, Deputy Judge Mulcahy QC said that the use of an injunction was “not fair or proportionate” and that she was concerned about the cumulative effect of such injunctions if every council was to get one. The Judge also said common land could not be covered by any injunction as councils did not own common land and only managed it.

That High Court victory is now under threat. Bromley Council is appealing the decision and is supported by three other local authorities in London. .

To promote the campaign, Gypsies and Travellers, LGT staff and supporters gathered on Friday 20th September outside Islington Town Hall for a group photo, joining the large rally in support of the climate strike. Mena Mongan, LGT’s Community Engagement Officer gave an inspiring speech , saying that change will come from people standing together in solidarity.

“We welcome all Gypsies and Travellers and supporters to get involved in the campaign in any way you can. Please come to our first campaign meeting on Tuesday 1st October, from 6.30-8pm at the LGT office at the Mildmay Community Centre, N16 8NA, Woodville Road, London,” said the LGT spokesperson.

“We will talk about how injunctions are affecting Gypsies and Travellers across the country and what we can do together to stop this.”

London Gypsies and Travellers will continue to be involved in the appeal hearing which will take place on 3rd December at the Royal Courts of Justice.

If you want to find out more please get in touch with Tanya Murat at LGT on 07494641746 or tmurat@londongandt.org.uk