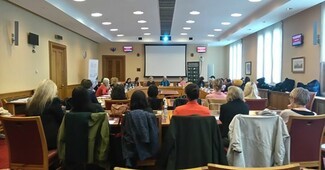 On Thursday the 7th of March the Gypsy, Roma and Traveller Women’s Empowerment Network (WEN) met in the House of Lords to mark International Women’s Day. Coordinated by The Traveller Movement, the WEN officially launched the trailer of the recently filmed Never Going to Beat You, a drama based on Traveller women’s real life experiences of domestic abuse, produced by Crispy Biscuit Films and written with the late playwright Jennie Buckman from Giants Theatre Company for the Traveller Movement.  The event was hosted by Baroness Coussins on behalf of the Traveller Movement with key note address by Kate Green, MP for Stretford and Urmston and co-chair for the All Party Parliamentary Group for Gypsies, Travellers and Roma.

Attendees heard from several members of the WEN, including Christine Browne, Denisa Gannon, and Tina McInerney.

Kate Green MP, a real advocate and champion for GRT people, gave the key note address. Kate discussed how the recent government announcement to “crackdown” on unauthorised encampments will do nothing to improve relations between community members and the police.  She also stated there are better ways of improving relations between GRT and settled communities and this included increasing site provision, and providing sufficient stopping places for Travelling communities.

Christine Browne spoke of the RomBelong programme, a targeted widening participation programme aimed at increasing the numbers of pupils from Gypsy and Traveller backgrounds at Kings College London. Chrissie discussed her own upbringing as a proud Gypsy woman, but of feeling unwelcome at school. It is essential that Gypsy and Traveller young people feel welcomed and included in every stage of their education. Traveller Movement’s own research revealed that 70% of Gypsy Traveller people experienced discrimination in some aspect of their education, which is why the RomBelong programme is so important.

Roma solicitor Denisa Gannon spoke of her amazing work supporting Roma clients in Leicester but also of the great challenges she faces due to decreased legal aid funding for vulnerable clients.

Tina McInerney and Yvonne MacNamara from TM introduced the trailer for, Never Going to Beat You, the recently completed short film based on Traveller women’s real life experiences of domestic abuse. This film was a real labour of love between the Traveller Movement, the late Jennie Buckman from Giant’s Theatre, and Crispy Biscuit Films, the film company headed up by Jenni’s son, Michael Buckman.

Michael, as producer and director of the film, discussed the importance of this work and how it was a great honour to tell this story with the women from The Traveller Movement. Tina McInerney from WEN and the Traveller Movement discussed how the film will be used as an educational tool in opening up conversations about domestic abuse. The attendees watched a three minute scene from the film, which all agreed was a stunning and accurate portrayal of coercive control within a relationship.

Following the clip, Cris McCurley of Ben Hoare Bell solicitors spoke of the recently published draft Domestic Abuse Bill and how government need to do much more to protect victims. While the draft bill introduces some positive new measures, it is overly focussed on prosecution rather than victim protection with very little investment in victim support services. 65% of women were turned away from domestic abuse shelters last year due to budget cuts, and two women are killed every week in England by a partner or ex-partner. There is an epidemic of domestic violence in the UK and the bill falls short in addressing that. Domestic violence costs the UK economy £66 billion every year. It is in everyone’s interests – women, men and children– to invest in shelters and domestic abuse support services, including accredited rehabilitative perpetrator programmes. It is also critical that local authority social workers receive sufficient training to engage in a culturally appropriate way with communities.

As stated by Kate Green MP, investing in women is the best way to make a whole community succeed. There is so much more we need to do the make sure all families are safe.

"While this event showcased the achievements of some exceptional Gypsy, Roma and Traveller women, the government needs to do much more to promote the social inclusion of all GRT women, and this includes protecting those experiencing domestic abuse. We know from our own work that services are stretched, social workers are overworked and ill-prepared to work with community members, and women and children suffer needlessly as a result. Advocacy around the domestic abuse bill will be a major piece of work for us this year, and we will be calling on community members to support us."

A community member who attended the event said the following:

“I found the whole event interesting but I enjoyed the film clip the most of all, and hearing from Tina her speech and word hit home a lot, as I have also been a survivor of domestic violence. And the young girls I was with have a better understanding of what’s right and wrong in a marriage.”