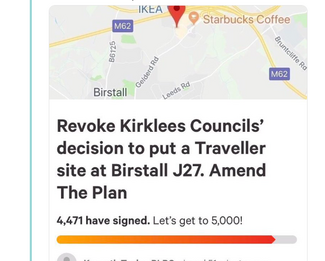 “When hate speech is reported on our site, we work as quickly as possible to remove it from our site,” Change.org tells the Travellers’ Times

One of the now deleted comments left on the petition said: “Nobody wants these scruffy thieving travellers here bad enough the country the state it's in already they've no intention of working they just live off stealing”.

Another one said: “This is ridicules, they should be made to pay for where they live like the rest of us, they live wherever they like make an absolute dump of the place, move on & leave their crap for someone else to clean up. They take what they want when they want, a lot of them are hard nut thugs they use us when they get the chance.”

Gypsies and Travellers are protected by UK equalities laws from discrimination and racism, and those that live on council sites pay rates, bills and rents, just like any other social housing tenant.

“Any petition against any other minority groups would have been be taken down immediately. #AntiGypysism is the last acceptable form of racism!” Tweeted Brigitta Balogh.

“I don't accept it and neither should you.

I'd like to ask all my followers to RT this to draw attention to this horrible phenomenon.” 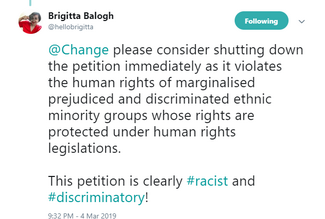 GRT charities also weighed into the thread and the Traveller Movement called on its followers to complain as well.

Nigel MacDugong called on Change.org to “get their act together, calling the petition a “cesspool of racism.” 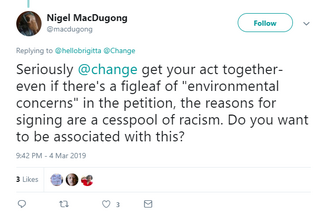 The petition was calling for support to oppose a Traveller site and a housing development in Kirklees, West Yorkshire, and linked Travellers with crime, say campaigners.

The petition, which has nearly 5,000 supporters, has now been edited and all references to Travellers and crime have been removed. Comments are no longer allowed.

The Travellers’ Times contacted Change.org who provided us with the following statement:

"We take down comments that contravene the Change.org Community Guidelines, which you can access here, which includes our policy on hate speech.

We have disabled comments on this petition as a number of comments breached our policy. When hate speech is reported on our site, we work as quickly as possible to remove it from our site."

Speaking to the Travellers’ Times, Brigitta Balogh said Change.org should have acted faster and should have not published the petition in its original form.

“The petition linked Travellers to crime and this was a wolf whistle for racists to engage. That outrageous and racist comments were then posted was inevitable,” said Brigitta Balogh.

She added that Change.org should meet with Gypsy, Roma and Traveller campaigners to tighten up their understanding of the discrimination often involved in petitions that oppose Traveller sites.

Equalities laws forbid councils from allowing discriminatory comments about Gypsies and Travellers on Traveller site planning applications on their websites, and the same laws require all organisations and companies that provide commercial services to not discriminate against ethnic minorities.