Travellers living on a public site in Lancashire are worried that they will lose their homes after the County Council announced that it is going to consult about selling the three Traveller sites that it owns.

Speaking to the Travellers’ Times, Irish Traveller residents of the Mellishaw Traveller site near Morecombe said that they had been there ten years and they were “very stressed” about the uncertainty of the proposed sale.

“We are worried and it’s causing us all a lot of stress,” said Irish Travellers Krissie and Marie*, who live at the Mellishaw site on one of the plots in their immaculate chalet. However, the site – which is home to around a hundred men, women and children, is severely in need of refurbishment and the residents say there are problems with rising damp, drainage, vermin and with piles of fly-tipping around the entrance, which the residents say is done by “outsiders,” and they have pleaded with the local authority to have the site cleaned up and measures put in place to stop the fly-tipping – but to no avail.

“We were given a plot on Mellishaw ten years ago,” says Krissie and Marie. “And before that we were living on the side of the road.” Mellishaw Traveller Site resident Nicole, 15, and her baby sister Mary-Doll, are worried about losing their home

“I pray that we do not end up back on the side of the road. That kind of life is hard now. We were evicted and moved on all the time and getting water and electricity – things that settled people take for granted – was hard and it’s hard to get your children into school. In winter it was even harder.”

We also don’t want to be put off here and forced to move into housing – and that’s if the council even offer us housing. We don’t want to live in a house. We would rather go back on the side of the road than move to a house. We feel stressed and closed in in a house. It’s not our culture.”

“Yes, there are problems here. But the council should sort those problems out. That’s what we pay our rent for. They wouldn’t just sell one of their council housing estates to a private person without making sure they knew what they were doing and could manage them properly. Cllr Dowding said she had visited residents on the Mellishaw site and heard about their concerns over the potential sell-off.

“The resident’s concerns are primarily about losing their homes once the site is sold, and also the fear that there will be no long-term guarantee of a tenancy for those already living on the site,” she said.

Cllr Dowding also claimed she had heard on the grapevine within Lancashire County Council that a ‘big name’ private developer was “in the frame” for the potential sell off, and that the fears of the residents were primarily centred on who would buy the site and what that would mean for their rights.

The Mellishaw residents’ fears of their homes being sold to private developers could have some basis in fact. The Travellers’ Times has seen a document given to Patrice Van Cleemput, who is supporting the residents and acting as their advocate.

The document has been written by a long-time Gypsy, Roma and Traveller campaigner from the Surrey area who is also a former police officer. In the document the campaigner details the problems he has observed when former council sites in the south east and west of England have been sold to private developers. 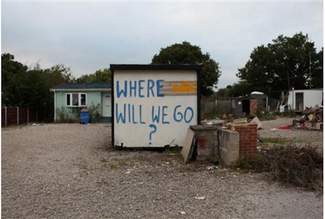 The document states (some bits have been redacted by the TT for legal reasons):

“If councils sell sites, they will need to be careful who they sell to. Short term gain can have long terms costs and do a disservice to the community. The best chance of reasonable success is where sites are run by experienced and established housing associations. However, the majority of councils seem to be selling to private investors (…).

Evidence can be found (…) across the UK. (…) Families who have lived on sites for a long time or in some cases were born there, are being forced off due to:

b)            Additional terms and conditions eg needing to do their own maintenance, stricter conditions on what is permissible eg parking vehicles, dog ownership

Gaining maximum profit often involves changing tenants because rent increases won’t be affordable for those on benefits and those who don’t have enough employment income. In some cases areas designated as GT site provision under planning regulations become park homes, housing elderly retired tenants from the wider community.

Taking (…) Council as an example, they sold all their sites to a private investor. Within a year this caused significant displacement of long term tenants, forcing some on to the road side, and others into applying for conventional housing. This resulted in many predicable cultural and social issues, which had not been understood or catered for by the (Council) housing department. Pressures stemmed from being rehomed in bricks and mortar where it was inappropriate, and increased unauthorised encampments. I addition, one of sites was so badly run, the council was forced to take it back into their management, with consequences of bad maintenance and disgruntled tenants.” The Travellers’ Times approached Community Law Partnership, the expert Traveller law firm, who are acting for two of the Lancashire County Council Traveller site residents caught up in the proposed sell-off consultation.

The lawyers revealed that they had sent a letter on behalf of their “clients”, warning Lancashire County Council that they needed – by law – to hold a consultation with all the residents of their sites before they decided whether to sell the sites or not.

The lawyers also pointed out that the Mobile Homes Act 1983 protects the residents’ rights and that this protection would continue under a different ownership if the sites are sold. They also said that the councils involved would still have some legal responsibility to monitor and ensure that the new owners abide by the law and continue to run the sites as Traveller sites.

Another point the lawyers made was that there are repairing obligations on any owner of the sites, contained in the MHA 1983, and some of the poor conditions complained about by the residents might amount to a statutory nuisance under the Environmental Protection Act 1990.

“Community Law Partnership will be supplying our clients with our thoughts on why the sites should remain in council ownership,” said the lawyers.

A spokesperson for the Council said that there was always the intention to hold a consultation with the residents and that the decision to consult had to wait until the 15th of February to be ratified by a full council meeting. They added that the sites would be retained as Gypsy and Traveller sites.

"The consultation will consider the proposal to declare the sites surplus to the county council's needs,” said the spokesperson.

"Officers from the council have visited the sites to explain that a formal consultation is set to be held, letters were also handed out to residents. The consultation is due to be launched April/May time.

This proposal is one of a number of budget proposals which will be consulted on as part of plans to save £77million.

The council wants to hear people's views on each of the consultations and the cabinet will consider all the responses very carefully before making final decisions later in the year."

Cllr Dowding told the Travellers’ Times that she hoped that the consultation would provide a genuine opportunity for the residents to tell the council what they wanted, and for options other than selling to a private developer to be explored by the County Council.

She added that the consultation should have a range of options that included the County Council retaining the sites, ownership being passed onto the local district councils, or other options like approaching a housing association to buy the sites or management and ownership being shared by the residents and the council.

“This could be an opportunity for the council and its Traveller site residents,” said Cllr Dowding.

(*The TT has withheld Krissie and Marie’s surnames at their request).