A Ciambra, directed by Jonas Carpignano and executive produced by Martin Scorsese, released in UK cinemas from June 15th

All over Europe, Romani people are living in their own secluded communities, un-integrated and separate from the opportunities others are offered. In the Calabrian region of Italy, one neighbourhood like this is the ‘ciambra’, a broken-down slum where generations of families live and work without access to amenities. In Jonas Carpagnino’s thoughtful film A Ciambra, a real Romany family - the Amatos - play loosely fictional versions of themselves onscreen, based in that community. The filmmaker has a deeply realist, documentary-style approach that highlights the genuine struggles and family ties of its characters.

Our protagonist is a fourteen-year-old boy named Pio Amato, who is forced to mature suddenly after the arrest of his Father and Brother. The oldest boy in his large family, he takes it upon himself to become a provider, and is willing to engage in any number of small-time criminal activities to achieve his goal. Carpagnino shot the film almost entirely on location in the real homes of his subjects, aiding to the authenticity of the style. This realism is interrupted occasionally to explore the memories and wisdom of Pio’s elderly Grandfather, whose way of life was far more traditional than the urban one being lived by his offspring. The families in the ciambra live under the yoke of local mafia, doing favours and toe-ing the line accordingly. 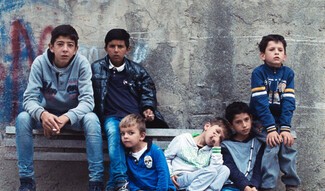 Pio goes on to befriend a business associate of his brother’s - a man named Ayiva (Koudous Seihon), an African refugee who tries to look out for the younger boy. He visits a refugee tent city, and learns much about the surprising shared values and struggles that other ethnic groups excluded from wider Italian society must face. Ultimately though, the tribalism of his own community prevents him from being able to truly remain friends with Ayiva. The strong ties of Romany life are both celebratory and limiting, keeping Pio from being able to relate to others outside of his community. Pio’s grandfather has advice that rings out through the film, and serves as a kind of guide for its characters. Many Romani people can probably relate to it. He tells Pio: ‘Remember; it’s us against the world.’