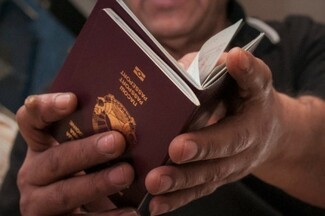 In the age of Trumped up travel bans and Brexit border disputes - Romani activist, Jonathan Lee reports on a small group of Roma in Macedonia who are bucking the trend and defying discrimination by winning a landmark legal case against border control authorities who had been ethnically profiling Roma at the Macedonian border for years.

Roma in Macedonia face widespread institutional racism and severe marginalisation from mainstream society. Roma unemployment is more than double the rate for non-Roma. They are much less likely to have access to medical care when they need it, and much more likely go to bed hungry at the end of the day. The gap between Roma and non-Roma in access to public services, housing, jobs and healthcare is growing.

When they are not being discriminated against in provision of services, Roma are intermittently subjected to violent hate crimes, brutalised by police officers, or are ‘mysteriously’ dying at an early age in the prison system. Finally, when Roma try to leave the country they are routinely denied at the border by racist border control officers.

Seven Romani women and men from Skopje, Delcevo and Pehcevo decided to get organised. They planned a test, with the help of the European Roma Rights Centre (ERRC), to get irrefutable proof that Macedonia was illegally profiling Roma at the borders. The Roma attempted to leave Macedonia via the border crossings to Serbia and Bulgaria in couples, and as individuals travelling alone. For every Romani person who attempted to cross the border, a non-Roma tester also travelled at the same time and to the same destination. The pairs were all more or less the same age, sex, marital status, and socio-economic background.

The testing resulted in every single Romani traveller being stopped, questioned and denied exit, whilst the non-Roma testers passed unhindered. The court ruled in favour of the Romani litigants and said they were discriminated against on account of their ethnicity. The case is a huge blow against against border profiling in the region, and the first to successfully use this kind of testing as evidence before a court in Macedonia.

“This will definitely be an important tool for future Roma rights legal activism” says Keti Jovanova, the ERRC lawyer who took the  case.

“Already we have had another testing case in Bitola about Roma being denied entry to a public swimming pool. I am expecting a positive judgement soon, so this decision is already making a difference to the lives of Roma in Macedonia.”

Nazifa and Bajran were the two litigants before the court, and were part of the group who overcame racist border control to visit their son who is working in France. They described the time when they were stopped at the border back in 2014:

“First, a border official took all the passports of the passengers” says Bajran.

“After 10 minutes the bus conductor came and called me and my wife by name and told us to get out. We were asked where we are going, what is the purpose of our trip, how much money we have with us, whether we have a letter of guarantee. No other passengers were asked any of this. They told us we could not cross.”

“I asked why they are returning us and if this applies just for us Roma” adds Nazifa.

“The police officer told me not to raise my voice, and that this applies just for Roma because many are asylum seekers. When I explained that we are not going for that purpose, that we are just going to visit some friends, and we had a letter of guarantee and all the necessary documents. He told us that we still can not pass, we have to go back.”

The same story is true for many Roma who were refused exit at the border. Officials who have been ordered to stop Roma from leaving the country, erroneously ask for proof of finances and letters of guarantee which are not required of Macedonian citizens under national law. Even when Roma have all of the unnecessary proof which officials ask of them, they are often denied anyway. Orhan, a 52-year-old Romani factory worker from Prilep, was denied exit at the ‘Tabanovce’ border crossing to Serbia even though he had a letter of guarantee and hundreds of euros in cash with him. He often travels out of Macedonia to visit his son who lives in Vienna, and decided to take his case to court after he was sent back from the border.

“Roma are treated unequally. What happened  [at the border] is discrimination and I wanted this treatment to be stopped. In the past four years, this phenomena has occurred a lot. I’ve heard about many Romani families who were denied exit at Macedonian border crossings. ”

Orhan believes that eRecent thnic profiling at the borders is symptomatic of wider racism in Macedonian society. “Once, I was denied service at a restaurant with my family.” he says in an interview at his home in Prilep. “The waiter told us that all the tables were occupied, but the restaurant was clearly empty. This is attitude is particularly common in Prilep, but also throughout Macedonia.

Many Roma still live in substandard conditions and a huge number are unemployed. We face constant discrimination, we are denied entry into swimming pools, discotheques, coffee bars and restaurants just because of the colour of our skin. My son who studied music in school was prevented from taking part in a music competition by the school’s principal just because he was Roma. If your skin is white then these things just aren’t a problem for you.”

Ethnic profiling, particularly at the borders of Macedonia, has been an issue which has plagued Roma for over a decade, as it has been notoriously difficult to prove, litigate, and stop. Macedonians have enjoyed visa free access to the Schengen zone since 19th  December 2009, and freedom of movement is enshrined in their constitution as well as in international human rights instruments.

This right has been abused in recent years however. The Macedonian Parliament, responding to calls from EU officials to manage migration “properly” or face the re-introduction of visa requirements, amended legislation to allow travel bans and existing passports to be revoked. This law was later declared unconstitutional, but the practice of denying Roma exit at the border continued in different ways.

Between 2011 and 2013, the ERRC documented 74 cases where Romani individuals were prevented from exiting the country, as well as 24 cases of passport revocations by Macedonian border officials. In 90% of documented cases, only Roma were asked for evidence to justify why they were travelling (in cases when Roma and non-Roma were travelling together).

The European Union’s accession process has been resumed and Macedonia are amongst the Balkan nations hoping to join the bloc. Whilst this victory is encouraging, the country still has a long way to go in terms of ensuring equal rights for its Romani citizens.

“This judgement should send a message to the border police.” explains Keti Jovanova.

“They should understand now what discrimination is, and know that what they are doing is illegal and that we can, and we will take action against it.”

The names of Romani interviewees in this article have been changed to protect their identities.