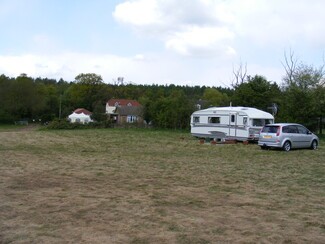 A Government review of the powers to deal with unauthorised caravan sites and developments has been announced today amidst condemnation from Gypsy and Traveller charities.

The Government say that they are holding the review – alongside a consultation – because unauthorised sites can cause “significant distress for both the settled and nomadic communities”.

They add that this has  been increasingly raised in Parliament over recent months and that they are now going to review the powers for councils, other land-owners and the police to deal with the approximately 3,700 caravans that are on unauthorised sites – which includes roadside camps and Gypsies and Travellers living on their own land but without planning permission.

Over 80% of Gypsy and Traveller caravans are on authorised sites

Over 80% of Gypsy and Traveller caravans are on authorised sites – and the majority of these are privately owned by the families themselves.

In a statement released today, Housing Minister Dominic Raab said that the “vast majority of the travelling community are decent and law-abiding people.”

“But, we are particularly concerned about illegal traveller encampments, and some of the anti-social behaviour they can give rise to,” said adding that “more legal sites” should be made available.

However – the government appears to be paying lip service to the need for more sites as most of the consultation questions are about increased powers to evict, remove and seize caravans from unauthorised land. The criminal offence of aggravated trespass and the use of court injunctions are some of the many proposals put forward in the consultation document.

“The upcoming review chooses to focus on the anti-social behaviour of a small section of the Gypsy and Traveller communities and is part of a push for an increase in eviction powers. If families are evicted from an unauthorised site, they often have nowhere else to go – there aren’t enough sites. It will just create a new unauthorised site in a new area. The result will be an absolute waste of public money and the two main victims will be statutorily homeless Gypsy and Traveller families and the British tax-payer.”

“It is a disgrace that in 2018, so many Gypsy and Traveller families cannot access a site to live on and therefore cannot access basic water and sanitation and often experience interrupted access to education and healthcare. It is bordering on farcical that the government have decided to place the emphasis on reviewing enforcement powers for statutorily homeless families, instead of focusing on local authorities’ nationwide failure to identify land for Traveller sites.”

Where will they go? A recently closed transit site in Wiltshire © Mike Doherty

Leeds GATE – who promote the award winning and money-saving negotiated stopping solution for roadside camps - has also spoken out and suggested that the government’s review will be prejudiced towards Gypsies and Travellers living on unauthorised sites.

Helen Jones, Leeds GATE CEO said that a statement by an organisation of council Gypsy and Traveller liaison officers vastly overstated the problems that some unauthorised camps can cause.

“Bill Forrester, Chair of the National Association of Gypsy and Traveller Officers, a body entirely comprised of Local Authority officials working on this issue day in and day out, recently stated that encampments do not present any problems,” said Helen Jones

“In contrast, whilst we can welcome long overdue discussion on this important issue, and recognise the significant challenges that some local authorities face, the tone adopted by the Housing Minister Dominic Raab in announcing the review, with its talk of 'many' local residents 'often' raising concerns, gives us no confidence that the Government undertakes the consultation with anything like an open mind.”

“The Traveller Movement hope that this consultation addresses and deals with the lack of authorised and safe sites available to the Gypsy and Traveller community,” said Yvonne MacNamara.