“This year is the worst for racism” 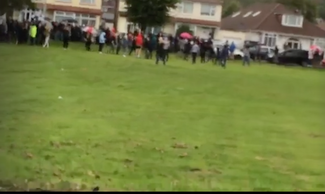 Exclusive interview with Jolene Connors, a young pregnant Traveller mother of a five year old child, who was one of the victims of a mob of 200 people who descended on their caravans screaming: “Hitler had the right idea to put them all in the oven”.

“I’ve travelled most of my life but this year has been the worst for racism,” says Jolene Connors, who witnessed the “vigilante mob attack” on their caravans, camped on a recreation field in Weston, West Midlands, on August 20th.

“We’ve always had ‘Pikey’ ‘Dirty Gypsy’ but never did I hear ‘Hitler had the right idea to put them all in the oven’. I know what people can be like but this even shocked me that it was allowed to be said in front of policemen,” she adds.

The Travellers’ Times watched the vigilante mob being organised on Facebook along with Report Racism GRT, and both organisations where shocked to see pictures of burning caravans and lots of racist abuse being posted by people who were planning to go.

About 200 local settled residents turned up and Police formed a barrier between the Traveller camp  as residents chanted, “off, off, off”, but despite their efforts to keep the mob back, two protestors got through into the camp attacking two of the Traveller men, says Jolene Connors.

“They did try to keep the protestors back but a couple got loose and hit two of our men, they hit back and the police dogs stopped it. It was supposed to be a peaceful protest but it was far from peaceful,” she said.

Other shouts from the mob included, “your children are retarded and dumb”, says Jolene Connors.

“We kept the kids in to stop them from getting hurt, but they still witnessed it. My girl was being sick all night as we were getting pushed out of the area,” she said.

The incident started at around around 6.30 in the evening, and the family managed to leave the recreation field at 10pm, but didn’t find a safe place to settle until 2am in the morning.

The police gave a dispersal order but Jolene and her family were mindful that protestors were still on nearby roads that had been shut down to manage the incident.

“We had to think of the children. We didn’t know if anyone was going to come back in the middle of the night and throw petrol bombs - which has happened before. The police knew this was taking place before it actually did, but only told us an hour before it happened”.

“One thing I would like to say is instead of worrying about us Travelling people take a good look at the rest of society,” says Jolene Connors.

“There is good and bad in any community and we should not all be painted with same brush.”

She added: “Why is it racist when other ethnic groups are treated this way but it is still it ok for signs to be put up in front of shops, pubs and food places saying no Gypsy or Travellers allowed?”

The Travellers Times decided to contact other Gypsy and Traveller young people to get their opinion on the incident in Weston:

“I find it scary how a 200 hundred strong group of people can just descend upon innocent families. More than likely small children would have been in those caravans and it would have been very distressing for the families. The fact something like this can go unpunished is disgusting as it just enforces that this level of racism is still tolerated. I thought the days of angry villagers gathering their pitch-forks were over”.

He added. “It’s infuriating the way the media reports these events and their opinion is always one-sided and biased. As a young person from a Roma background living in the 21st century, I feel like racism towards Gypsies and Travellers is widely tolerated and I’m sick of it to be honest”.

After watching a video of the Anti-Traveller protest in Weston Besty Mobey (23), an Intern at Friends Families and Travellers, told Travellers’ Times:

“Look how disgusting and vile can people be towards others that choose to lead a different lifestyle, this is where society baffles me, it's the 21st century and people are still ostracizing and judging others for being different, it's cowardly and narrow minded. We have been prosecuted for centuries; our skin grows thicker, when it shouldn't have to”.

Researching and writing this article has shocked me, says the TT’s Lisa Smith.

Jolene Connors says it has been the worst year of racism she has ever experienced on the road. What has led to this apparent increase in hate crime attacks against Gypsy and Travellers this summer?

Is it the uniquely prejudicial constraints on Gypsy and Travellers lifestyle that have resulted in a discriminatory and flawed planning definition that requires families to prove they travel in order to remain eligible to live on and develop their own sites?

Or is it the dehumanising language publicly displayed by politicians like Douglas Ross MP or Steve McCabe MP? Or is it the press inducing moral panic through military like terminology of “invasions” and “swarms” used to describe Gypsy and Traveller camps?

Either way, its clear Gypsy and Travellers across the country are suffering from what appears to be a summer of increased violence and harassment directed towards the UKs oldest ethnic indigenous minorities.