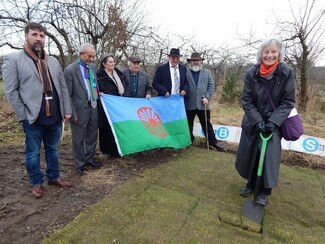 Baroness Janet Whitaker has opened the Gypsy Cooperative’s planned development of a new national community and resource centre for Romany Gypsies and Travellers to come together and tackle prejudice.

The Baroness, a member of the Parliamentary group for Gypsies, Roma and Travellers and a colleague of the late Traveller rights champion Lord Avebury, was invited by the Gypsy Cooperative and the Southern Gypsy Council down to Blossom Lodge , a Traveller site near Coxheath in Kent, to ‘cut the turf’ for the foundations of the new community building.

“I think all politicians should come down to this wonderful place and meet with the people organising this,” she told The Travellers’ Times. “Blossom Lodge looks like a wonderful place to live and the residents here are a valuable part of their local community.”

The Gypsy Cooperative said that the planned community centre would be an educational, cultural and community resource for Gypsies, Roma and Travellers in the UK.

“We are going to start a crowd-funding campaign amongst the community and the plan is to raise funds to build the centre brick by brick,” he added.

The ½ acre of land for the new community centre has been donated to the project by Romany Gypsy businessman Roger Lee, owner of S&B developers.

Mr Lee, who is also a member of the Gypsy Cooperative and the Gypsy Council, told The Travellers’ Times that he wanted the centre to provide an education for young Gypsy people who wanted to be successful in business and other areas.

“I am fortunate to have been successful in business and I want to put something back,” Mr Lee told The Travellers’ Times.

Mr Lee – who was born and brought up on the road – said that his own formal education through school “had not been great,” but that he had learnt to be a successful businessman in car rentals and land developing through experience.

“One of the things that I hope the centre will be put to use for,” said Mr Lee, “is to teach business skills to young Gypsies and Travellers, so that they get the opportunities I got, but at an earlier age.”

After cutting the turf for the community centre, Baroness Whitaker had a surprise extra task in store for her.

At the entrance of Blossom Grove Traveller site, a short distance from the planned community centre, was a Romani flag draped over a boulder set in a garden.

Under the flag was a brass plaque that was a memorial to Gypsy, Roma and Traveller campaigners who had passed away – some of whom the Baroness had known personally.

“We honour the work of those who fought for Gypsy, Roma and Traveller rights and who are no longer with us,” said Joseph Jones.

Baroness Whitaker unveiled the memorial and was moved by the following inscription on the brass plaque:

“The Gypsy Council UK and the Gypsy Cooperative dedicate this remembrance plaque to:

The Gypsy Cooperative released the following statement encouraging other Gypsy, Roma and Traveller organisations to get in touch to help promote and use the planned community resource centre that they said would help “extinguish prejudice” between the “Romany Gypsy and Traveller community” and “local residents”.

“We think it is time to extinguish the prejudice between local residents and the Romany Gypsy/Traveller community,” they said.

“The Gypsy Cooperative has been formed to try and resolve many of these issues as a contact centre for all local people, local parishes and local councils to come together and discuss issues that arise from both communities as we are in a position to speak on behalf of our community,” they went on to state.

“We welcome any other organisations to contact us and help create a better future for all our communities.”

The Travellers’ Times will be keeping up to date with the development of the new Gypsy Cooperative community and resource centre, so watch this space.