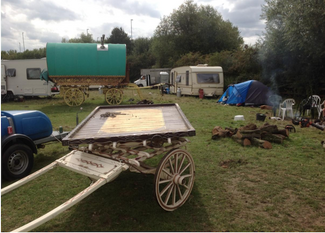 Councils are failing to meet government requirements for Traveller sites with less than one in five planning for a five year supply of pitches in sufficient numbers to meet their own locally set targets, says a shocking new report by Gypsy and Traveller campaign organisations.

The research using freedom of information laws provides “a snapshot” of the progress made in the South East, by Friends, Families and Travellers (FFT), and the East and West Midlands, by the National Federation of Gypsy Liaison Groups (NFGLG), in identifying the supply of land for desperately needed pitches for Gypsy and Traveller accommodation.

“The lack of accommodation provision has a huge impact on the health, education and wellbeing of Gypsies and Travellers, maintaining the chronic exclusion and vulnerability that these communities face,” say the report’s authors.

The new highly controversial Planning Policy for Traveller Sites (PPTS), rolled out in the summer of 2015 by the government, sets out the requirement for local planning councils to "identify and maintain a five year supply of specific, deliverable sites, sufficient to provide five years’ worth of sites against their locally set targets". Yet there is no central government monitoring to find out if councils are doing this – nor any sanctions if they don’t. Instead, it falls to Gypsy and Traveller campaign charities to monitor councils compliance with the PPTS.

According to FFT, out of 66 councils investigated by the charity in the South East, 56 had failed to identify a full five year supply of specific deliverable sites and five had no identified need for sites at all.

FFT claim that a total of 1745 additional pitches are needed in the South East of England by the year 2033.

“This research clearly highlights the mechanism to ensure more sites for Gypsies and Travellers are provided in the immediate future is not working,” says FFT.

“In the meanwhile Gypsies and Travellers continue to be evicted from one place to the next.”

The joint report reveals that an equal lack of action from councils on Traveller site supply is also happening in the East of England and the West Midlands.

NFGLG research shows that out of 70 councils surveyed across the two regions, 55 have failed to identify a full five year supply of specific deliverable sites, 10 local planning authorities had not yet identified a 5 year pitch requirement target and 1675 pitches are needed by 2034.

The report shows that there has been insufficient progress in meeting the requirements of the PPTS and in meeting the accommodation needs of Gypsies and Travellers.

The report notes that similar research conducted earlier this year by the London Gypsy and Traveller Unit (LGTU), revealed an even worse prospect for the future homes for Gypsies and Travellers.

According to researchers at the LGTU, since 2012 only five London councils have successfully met their own Traveller pitch targets and that four of those councils are planning extensions to existing sites rather than by building new sites.

The separate LGTU report ‘Planning for the accommodation needs of Gypsies and Travellers in London’ can be found here.

The NFGLG highlighted the effects of council inaction on new Traveller pitches on a Romany Gypsy woman who lives with her family on a small, privately owned site in the West Midlands.

At the family’s last planning application process, they received around 120 letters of support, almost all of them from local residents.  She went on to explain: “The land was used for tipping, it was an eyesore, covered in rubbish and scrap.  We’ve cleaned it up and invested in this site to get the planning.  We’ve got good friends in the village, the children are happy at school.  If they want us to fit in like this, then we need more sites”.

As with other members of the Gypsy community, the family’s main concerns of are about the next generation.

“What’s going to happen to our children and grandchildren?  There’s nowhere for them to go.  How can they get a full education if they are being moved on all the time?  And when you are moved on daily, you can’t even get running water.  Without a permanent address you can’t register with a doctor or a dentist,” said the woman.

The difficulties in maintaining cultural identity in the current planning context were also raised.

“We want to travel, and we have to travel to get the planning status, but we can’t travel easily now because you get moved on daily.  People just see the caravans that shouldn’t be there and want them gone.  But if you haven’t got a site you can’t go home either.”

“The council is helping the settled community, what about the Gypsies?  We don’t want favouritism, but we do want to live”.

The full report ‘Research into Gypsy and Traveller Pitch Supply’ by FFT and the NFGLG can be found by following this link or by visiting the two organisations websites.

The Welsh Assembly did not adopt the new controversial PPTS.