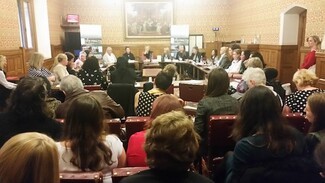 The Women’s Empowerment Network was launched by two of its members Tina Purcell & Kealy Sly. In launching the group, Tina said: “The Network has roughly 10 members representing all GRT women. Our aim is to create a peer support group, a platform for voices to be heard, to harness our existing skills and give us all a stronger collective voice. We will also be supporting other less fortunate GRT women from our communities to build their confidence and to address discrimination.”

The event, organised by The Traveller Movement and hosted by Conservative Peer Baroness Fiona Hodgson of Airbinger, brought together women from across the communities to share their experiences.

Lisa Smith, Education Consultant and Travellers’ Times youth engagement officer opened the event and said that the day was about celebrating the strength and resilience of Romani and Traveller women in times of increased austerity. Lisa went on to outline her vision for improvement in education and called on the government “to engage in direct contact with us and involve us in policy and decision-making processes on issues that affect us”.

Irish Traveller and Women’s Worker Tina Purcell spoke next, and told her inspirational story of being a domestic violence survivor. Tina’s story really resonated with many of the women in attendance and she received a rapturous applause after she finished speaking.

Josie O’Driscoll, the Director of Herts Gate spoke about hate and discrimination, outlining the impact this has on GRT women. Josie said “GRT women feel the effects of race and gender discrimination”. This is why, Josie went on to say, Herts Gate have developed a hate crime reporting website called Report Racism GRT.

Denisa Gannon, was the next to address the room. Denisa spoke of racism and discrimination she experienced in the Czech Republic before leaving to come to the UK. Denisa is now a trainee solicitor and when she qualifies in January 2018, she will be the first Roma woman lawyer qualifying in the UK.

The final speaker was Kealy Sly from Leicestershire Gate, who opened by saying it was her first time in Parliament and how proud she was to be invited to speak. Describing her time at Leicestershire Gate, Kealy said “I work and live with these beautiful, strong and resilient women everyday".

The event highlighted that there is clearly much to be done to tackle the economic, education and health disadvantage and discrimination facing Gypsy, Roma and Traveller women.

But it also showed that Gypsy, Roma and Traveller women are at the forefront of tackling the disadvantage and discrimination experienced by their communities.

These inspirational women take on leadership roles, act as spokespersons for the communities and found and run their own organisations. The newly established GRT Women’s Empowerment Network will help ensure these women continue to challenge and address the disadvantages together.