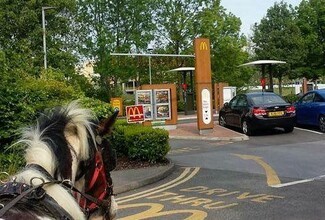 Absy Duffy and his mum Ryalla Duffy “like a bit of direct action”, so one afternoon they decided to do something to show solidarity with ConnOr John Hamer, a young Traveller man who is protesting outside a McDonalds near Manchester after they refused to serve him on his horse and wagon.

Yoking up their filly cob ‘Biddy’ to an exercise cart, they set off to from home their local McDonalds Drive-Thru in Lincoln to get Absy, 16, his dinner.

“It was in support of Connor John Hamer,” Ryalla Duffy told The Travellers’ Times.

“The young lads been camped out in the car park ever since. It's like apartheid being refused service.”

They arrived at the McDonalds and Absy ordered a chicken burger, fries and a large Coke. The manager of the McDonalds refused to serve them, so Absy, Ryalla and Biddy settled down to wait as the cars queued up behind them.

They did not wait long. Ten minutes later, the manager saw sense and caved in and Absy got his dinner at last. The Travellers’ Times hopes the burger tasted extra sweet – with an added taste of victory!

Hopefully, the Lincoln McDonald’s manager will let the manager of the Manchester McDonalds know that it’s not a “health and safety hazard” to serve Gypsies and Travellers on horse-drawn carts and wagons – in fact it’s a pleasure, and Gypsies and Traveller’s money in the till is as good as anyone else’s – whether they come by horse, foot or car.

Meanwhile, Connor John Hamer, 23, continues his protest in Bury, Manchester, and is settling in for the long term.

Speaking to The Manchester Evening News, he said:

“I’m going to be staying as long as I can until I get my point across. In McDonald’s rules it doesn’t say that horses are banned, it just says that going through on one is advised against.

“I’m on the car park, I’ve seen quite a few McDonald’s bosses turn up with their brief cases and some of the managers have been out to speak to me.

“I’ve been in to buy a drink as well and they were fine with me.”

As it stands, Connor has with him a dog, horse, cart and generator, and a Shetland pony thought to be named Toby, was “dropped off” not long ago.

He added: “I live on a farm and there are plenty of horses there. I can get a lot more brought down!