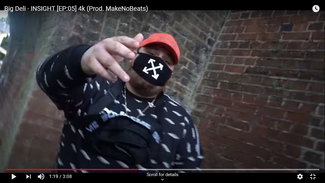 A Romany Gypsy rapper has released a track about being a Gypsy and living on the housing estates.

Big Deli, who is from Portsmouth, Hampshire, uploaded the track on to You Tube on the 20th June and it has already racked up nearly 500 views.

“If you ain’t got the budget – you get dipped like a nugget” raps Big Deli in a track more dystopian and darker than his usual music.

Watch the You Tube video of Big Deli’s rap: (Warning: Big Deli is rapping about the experiences of being a Gypsy in 21st Century UK – this track contains words some listeners might find offensive)