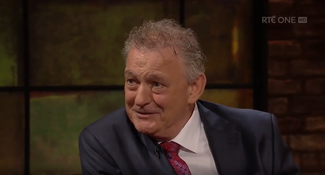 During his Presidential campaign, Peter Casey said that Travellers should not be recognised as an ethnic minority because they are “basically people camping in someone else’s land”, (clearly he doesn’t understand the definition of ethnicity) he then goes on to say he didn’t know Travellers were granted ethnic status in Ireland … says Josie O’Driscoll.

I mean come on how you can stand in a presidential election and be so oblivious as to what’s been happening in the country? Irish Travellers were formally recognised as an ethnic group in 2017.

Casey also claimed that Travellers are “not paying their fair share of taxes in society”. This one is so out of date Peter.

Casey also said that if he had power he would “invite” all Travellers to be corralled in Phoenix Park, Dublin, for five years, a move that Irish Traveller actor and campaigner John Connors said was akin to creating a concentration camp for his people.

When challenged on the RTE Late Late Show by Travellers Kathleen Laurence, Martin Mongan, and Pa Riley, on the comments he made during the campaign, he tried to defend himself by saying:  “I was not victimising anyone. I’m all about inclusion. We need more inclusion. Marginalising a community, is wrong.”

If you’re going to say something Peter at least say it and own it, don’t try to backtrack and wiggle your way out of it.

Watch Casey being challenged by Irish travellers on RTE Late Late Show by following this link.

Casey discussed his future as a politician in Ireland, claiming that he will run for a Dáil seat in Donegal, and maybe other constituencies as well.

Peter Casey needs to educate himself on Irish issues first.  He lacked coherent ideas on any policies. His plans to be Taoiseach were laughable.  He should be questioning real issues in the Irish public’s interests rather than honking his divisive and populist nonsense to get votes.

Some of the viewers were not happy with the interviewer Ryan Tubridy and came to Caseys defence saying that it was an “ambush” and that they had deliberately filled the audience with Travellers so they could have a pop at him.

I am sorry, but that doesn’t wash. Aren’t Travellers allowed to go on TV shows and challenge would be politicians who want to put them in concentration camps and deny their ethnicity? When Peter Casey decided to put down people to advance his cause, and to demonise Travellers with his populist agenda, Travellers had the right to a reply, and fair play to them for being brave enough to exercise that right.