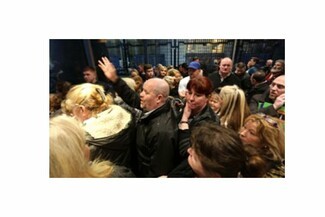 Travellers and Pavee are celebrating victory after decades of campaigning finally leads to the formal recognition of their status as an ethnic group by the Irish state.

Members cheered and applauded in the Dáil (Irish parliament) on Wednesday as Taoiseach (Prime Minister) Enda Kenny made the announcement.

There was a standing ovation as he gave status to the "distinct ethnic group,” adding that this would go some way to ensuring they have a "better future with less negativity".

“This announcement shines a light on Travellers’ rich distinct history and culture and sends out a message of respect and inclusion,” said Pavee Point Director Martin Collins.

“It also lays to rest notions that Travellers are a primitive, dysfunctional, failed settled people who originated from the famine and who just need to be normalised and civilised by the State,” he added.

Minceirs Whiden (Cant for Travellers talking), Ireland’s all Traveller forum, also welcomed the statement by Enda Kenny and said that it “sets the foundation for a new relationship between the Traveller community and the settled community”. They added that the relationship would be “based on respect for cultural difference and inclusion.”

“Minceirs Whiden believes this is a very positive step and hope this will set a new foundation for the future where Irish Traveller culture, history and our community’s contribution to Irish society is recognised and respected,” they said.

The Irish Traveller Movement also welcomed the “historic” statement and gave thanks to all the campaigners that made it happen.

“We share this historic day with those who fought by our side and stood with us on this long journey, when no one else would - and you know who you are,” said a spokesperson for the ITM.

“This is a new chapter in our history,” they added.

“We now need to make this count for every Traveller living on this island and build and strengthen our movement to ensure that we meet the challenge for tomorrow and make equality real.”

“We applaud every one of you for your tiresome dedicated work and commend our brother and sister organisations, Pavee Point, National Traveller Women Forum and Mincier Whiden.”

Martin Collins said that the historic decision was a big step forward, but recognised that the fight for equality for Travellers continued – and that it would be led by future generations of Travelers “with pride in their identity.”

“We know that acknowledging Traveller ethnicity does not solve the problems that Travellers face in their daily lives – discrimination, unemployment, lack of proper accommodation and poor educational outcomes,” said Martin Collins.

“But respect for our culture has the potential to deconstruct centuries of internalised shame within the Traveller community and allow future generations of Travellers to grow up with pride in their identity.”