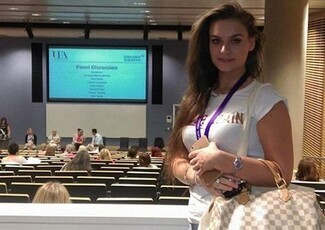 “To be truthful, I expected it to be a load of Gorjas that don’t know what they were on about, but what I expected and what I got was two different things,” says Sephina Atkinson, interviewed by the TT’s Lisa Smith at the recent Gypsy, Roma and Traveller Education Conference on the 16th June, 2017, at the University of East Anglia in Norwich.

Tell us a bit about yourself and why you went to the conference?

I’m 19 years old …says Sephina Atkinson. I have never been to a conference before, this one was looking at how to improve schools and colleges for Gypsies Roma and Travellers.

I stayed overnight with Ella from Leeds GATE, which also I have never done before. When we got there we went to the cathedral in Norwich which was lovely, and then went on a search for somewhere to eat. The next day we had to get up really early to get to the conference on time.

What did you expect before you arrived?

To be truthful, I expected it to be a load of Gorjas that don’t know what they were on about, but what I expected and what I got was two different things. There was a mix of people there from all over the country, giving their part of what’s going on, and talking about how we can improve things. There were stalls there, and I didn’t know what all of them were about but some had books and tapes to help people learn to read and write, which I thought were good.

What were your first impressions of the conference?

I was a bit tired, and I didn’t know what was happening, but as it got going I got more interested. As the day went on I started to enjoy it, and I felt that half the people there did understand Gypsies and Travellers, but that some of the professionals there didn’t let the Gypsy and Traveller young people speak, and answered questions for them. Probably if they had let them speak, there would have been a completely different answer to the question.

What was your favourite bit?

The panel of young women who were talking about their education and how it went (the Secondary Education stream) was my favourite. It was interesting because it was young Travelling people talking, not Gorjas. They knew what it was like for us, and they had been through things that I had experienced at Primary school. I was impressed that the girls had gone through bullying and name-calling, but they kept going and worked through it to the end. It was good to hear what they had achieved and how they had got there, despite prejudice. I had never heard a young woman going to university even though she was married. I think because she was married to a Gorja boy this would have been easier for her, because some Travelling men wouldn’t believe in letting their wives go to University.

What did you think overall?

I enjoyed it, and when it got going and we got talking to other people, and heard what they thought about it, I found it interesting. I realised that Roma and other Travelling people had been through similar things. If you’re different, people are frightened of you, and they are spiteful. There is always going to be some bullies. If people talked to you and gave you a chance, they would see that we are decent people.

Was there anything that you would have liked to have been included that wasn’t?

It would have been good if there had been more young Travelling people there.