“We have to adapt to their way of doing things, yet they never adapt to ours.” 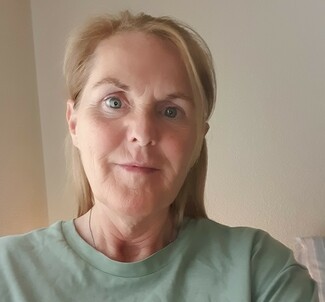 “I was Travelling until I got married at 19,” says Maggie McPhee, who still lives on a Traveller site in Perth, Scotland. The beauty of the nomadic life shines through in Maggie’s writing. Her poems and prose are full of the enchantment of a young child, and then young woman, following the road, the seasons, and the work, in Scotland. Yet Maggie’s writing also resonates with loss and sadness for a traditional way of life that is becoming “increasingly harder.”

“Back then, you would need only to complete six months a year in school,” says Maggie. “So, in autumn and winter we would stay in Perth and then in the spring we would pack up and be off to the Highlands.”  Once they arrived at a camp, Maggie, her sister, two brothers and mum and dad, would unhitch the caravans from the vans and set up a big tent to wash in, although if there was a nearby stream, they would often wash in that if the water was not too cold. The stream would also become a fridge for their milk and butter. Sometimes they would cook on an open fire, sometimes not. Sometimes Maggie’s brother – a keen fisherman – would catch some salmon and trout which he would then sell in the nearest town. 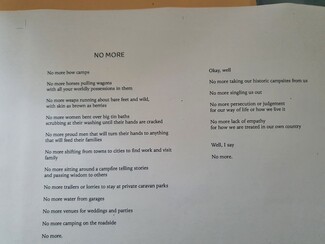 No More - a poem by Maggie McPhee

Maggie’s dad James McPhee, would avoid the cities and towns because “the people were not so friendly.” Instead, he preferred to stop in the villages or “way out in the middle of nowhere,” says Maggie. “My dad would only ever leave a footprint, there would never be any mess left behind. A lot of people knew my dad and how hard he and his friend Sammy Stewart fought for a proper site with the right amenities for Travellers, and a proper base for the winter.”

The McPhee family would follow the work and make a living “picking the berries and the tatties,” and as whelk collectors on the Lochgilphead inlet of Loch Fyne, a sea loch on the stunningly beautiful west coast of Argyll and Bute.

Through a Traveller's Eyes - a poem by Maggie McPhee

"We would pick the tide out, and then pick the tide in,” says Maggie. “I miss the peace and quiet, being in the middle of nowhere, the glens, the hills and the waterfalls and hearing the sea from the camp.”

“Travelling has got harder with all the old stopping places closed off,” adds Maggie. “For hundreds of years Travellers have been using them, but now they are car parks for tourists, blocked off by boulders, or built on. All the councils and government need to do is open them up, or buy a small bit of land put down some hardstanding and a toilet.

They have taken away our way of life. We have to adapt to their way of doing things, yet they never adapt to ours.”

Read more creative writing by Maggie McPhee: 'My Heart Broke Into a Million Pieces - A Scottish Traveller Mother's lament for her Outlaw Son'.