A tribute to Joseph Smith 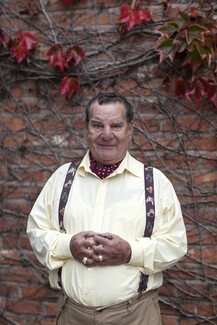 A lovely man and a brave one too.

It was a pleasure to have met him.

From our interview with the Smith family published in the November 2018 issue of the Travellers' Times Magazine:

"When the Berlin Wall came down and the former Soviet republics and satellite states opened up to the West, Joe Smith started a charity called Christian Assistance for the Needy to alleviate some of the terrible conditions in the orphanages in Romania. Most of the children in the orphanages were Roma.

Joe’s first trip of many to Romania, with a convoy of trucks with donated sheets, food and other aid, took place in 1990. “The things I saw stay with you,” says Joe. “It’s better now, but back then, in some places the children were tied to the beds. They didn’t cry. There was no one to come to them if they cried, so there was no point in crying. We had to distribute the aid ourselves because there was a lot of corruption. One manager of an orphanage told me to put a giant Easter egg I had brought in her office. So I crushed it into bits and gave each of the kids a piece.”

I ask Joe why he got involved in the aid convoys. He pauses and quietly says: “Because God told me to.”'

(Portrait of Joseph Smith at his home in Cheshire in 2018, by Jean Goldsmith)