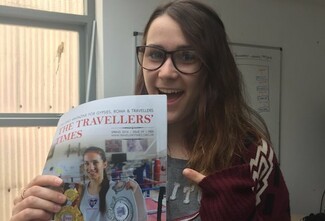 Dear readers, the new Spring edition of The Travellers’ Times Magazine is my first magazine as editor and I hope you will agree that it is a knockout. If you are wondering – no that is not me in the photograph - it is Elle, who works for The Rural Media Company in whose office The Travellers’ Times is based and who is kindly holding up the new magazine.

As we put each Magazine together, a general theme for each issue begins to take shape. The theme for this issue is fighting back and standing up for our rights. What with the current new laws that threaten Gypsy and Traveller identity, the continued denigration of all things Traveller in the newspapers and on TV, the discrimination by big household name commercial businesses and the continued mouthing of anti Gypsy and Traveller sentiments by politicians, ‘fighting back’ seemed appropriate.

That’s why we put the young champion boxer and Olympic hopeful Ivy-Jane Smith on the cover.

As the old saying goes – you have to be in it to win it and there are many ways we can all be in it.

We are about to send out another free mail-out next week and we are sorting out new mailing lists, so if you have not got your copy yet and want one, please FB message us your postal address, phone us on 01432 344 039 and ask for George, or email your address to travellerstimes@ruralmedia.co.uk.

As well as single copies to our readers, we can also send multiple copies to small organisations or site addresses – just say how many you want.