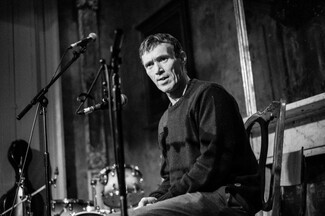 On the release of his new album Herself and Myself, Traveller singing sensation THOMAS McCARTHY talks to Damian Le Bas about learning music from his mother, coming from a well-respected Traveller family, and why traditional music declined among Travellers and Gypsies.      Picture: Philip Wolmuth

“MY background is a family of traditional singers: cousins to the most famous traditional musicians in Ireland, the Dorans.

"They were two piping brothers. And they learned the pipes through their grandfather who was a man called Big John Cash. Now John Cash had a first cousin, Jack Cash, who was my cousin’s grandfather. He was a piper as well.  So they had great music in them.

"But mainly it was songs in our family. All of us sing, you know? They sang a bit of everything, going back the generations.

"My mother used to sing blues songs, rock ‘n’ roll, country music, a bit of everything. She was open minded to all types of music. And she had a good ear, if you know what I mean.

"And certain people would be singing songs, and she’d give you a nudge and say, “That’s not the right way to do that.” Just amongst us, you know? And she’d teach us our way of doing it.

"I’m not just saying it because it was her, because it was my mother, but ninety nine times out of a hundred, she’d always be right, you know? She had a great ear.

"I dedicated the new album to my mother, because without her I wouldn’t have had any of these songs. All them songs would have been forgotten, if it wasn’t for my mother.

“It’s a cold country, you know – and the government were trying to get people off the road”

"They were wonderful people. They came from the midlands of Ireland, a place called Offaly, and the town that they settled in, hundreds of years ago it was taken over by the English. So when my great-grandfather settled there, there’d been no traditional music there for hundreds of years.

"Then my grandfather moved into the town. My grandmother died when her youngest was three months old, so he’d probably been on the road- and especially over there, it’s a cold country, you know- and found it too hard on the road, and the government were trying to get people off the road anyway. So he decided to move into a house.

"And when they moved into that house, there was no traditional music in the town at all. But once they moved in they’d be singing every night, all the neighbours would come in, half the town would turn up. Because they didn’t hear this type of stuff before.

“It was nice to hear that they were a decent family, you know”

"And he was a good, kind, decent man [my grandfather].  He actually fed certain families in the town. My grandfather was a wealthy man when a lot of people didn’t have money- I’m going back now to the 1940s, the 50s, you know, when even settled people didn’t go to school. And my grandfather was well known- I’ve had settled people pull me up in that town and say, “If it wasn’t for your grandfather, my family would have gone hungry”. Because there was no such thing as the dole money in them days. But it was nice to hear that, you know? To hear that they were a decent family, and they were well loved in the town. I suppose they were living there for the best part of a hundred year.

"They were settled on and off. You know yourself, what they’d do is they have the house but go off in the summer. He never really settled. My grandfather hated the house, but he had no choice with eight little children by himself. And he never married again.

"My grandfather had thousands of songs. You see, being in the centre of Ireland, lots of Travelling people, north, south, east and west, would pass through to get to the other side. So lots of people stopped off with him, stayed with him. That’s how all those songs came about, and himself going around the south. But he didn’t really travel into the north, he didn’t like the Troubles. So he stayed mainly south, and to the west of Ireland: that’s where he travelled.

“When I sing, I can hear the pipes”

"The Irish pipes were designed to copy our style of singing. Well, I can’t say “our” style, but that style of singing. They were definitely made to imitate the human voice. And that’s how my mother used to sing, and I hear it myself when I sing: I can hear the pipes. So they were spot in what they were doing.

"It was an ancient style of singing that was passed down, and since the 1960s when the portable television came in, amongst all the Travelling families – and the Gypsy families as well, don’t forget – as soon as you could attach a portable television to a car battery, traditional music died out in the Gypsy and Travelling community overnight. And there’s only very few families [keeping it going].

"I can name you Gypsy families that kept it going for a long time: you had the Brazils, they were brilliant old singers. You also had the Smiths – Wiggy Smith and Levi Smith. They were great old singers. I have stuff of theirs, and their songs are the equal to ours. And you don’t hear many traditional Gypsy singers any more.

"Our people did the exact same thing as the Gypsy people: all the Country [and Western] music, started singing like Yanks… I have a brother, if you heard him sing you’d think he never left Texas! I love ‘em, and he’s a great singer, but I said “What about the old [songs] and he said “Ahhh, I don’t like that old s**t”, you know? [Laughs] What can you do with it? He says “I don’t like it, I like Country music”.

"Lots of [Travellers] are like that: the old music became uncool. Gypsies and Travellers started singing the Beatles songs, the English songs.

“Put your own stamp on it”

"Singing is like anything, it can be learnt.  A thousand mile journey begins with the steps, you know? And that’s how I learnt.

"My mother would sit the five of us down, and start up, and she’d say “No, you’re not doing that right. Go back again, go back again. And then she’d start us with the warble, what we call the warble, you know? That thing in our voice. She’d say “Right, practice that. Practice that alone. Practice your words. And when we got a grip of it she’d say “Right, you have it now. Now make your own stamp. Put your own stamp on it. Don’t be copying me, you know?”

"I’m heading off to America, Canada, and hopefully New Zealand as well. So that’s what I have for the new year.

"It was just another way you could get your foot into a door as well. To make a few bob. You know, going back. ‘Cause everybody in those days made their own entertainment. So some settled people who liked music would be glad to see them coming, Gypsy and Traveller. They were acknowledged for their music and song.”

Thomas McCarthy’s new album, Herself and Myself, is available to buy on CD from ThomasMcCarthyFolk.com, or as a digital download from Amazon.co.uk and iTunes Music Store