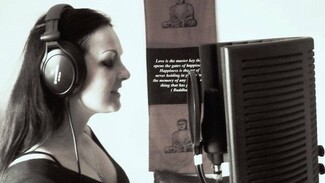 Laura Marshall is a rock singer with attitude hailing from Herefordshire and comes from an English Romany Gypsy family with a long line of talented storytellers and musicians - some even famous.

Sakara - Laura Marshall’s stage name - began singing from an early age to her first audience as part of a local choir, and since has continued to write and perform in various bands and projects.

Sakara is a very versatile & creative artist and has always been conscious of her own identity and enjoys crossing a lot of musical boundaries which make her style very unique. She became involved in the music industry around 16 years ago; touring & sharing the studio and stage with very talented musicians, both known and unknown.

Her career changed direction when she met composer/producer Stephen Clarke in 2010. It was then that her solo career began and a powerful collaboration was born. Soon after that meeting, she unleashed a debut album "Blood & Stone" and in 2014 a second album release "Beauty & Bravery" both were recorded at FractalSoup Studio & released via Ravenheart Music Records.

Sakara is in the beginning stages of writing her third album with a single release coming this summer and a full album release this winter as well as preparing for live shows.

When she is not in the recording studio or appearing on stage as Sakara, Laura Marshall is also an advocate of Traveller's rights and actively works to dispel the many misconceptions about her culture and its diversity. She is a Travellers’ Times advocate and has been on the TV, media and journalism courses run by The Rural Media Company, publishers of The Travellers' Times magazine and website and made a short film and has appeared on various radio shows as well as assisting and educating universities and published several articles on Romani Culture. She is keen to get involved with the organization for the Gypsy and Traveller demonstration against the Government’s new laws to re-define who Gypsies and Travellers are and who is allowed to live on a Traveller site and who isn’t, that is being organized for May 21st 2016

Here is the single "I DO" a sneak preview from his coming album "Torn Pages" - "She wrote to me" featuring Sakara singing. The album will be released later this year also discussions are taking place to put on a live show in the autumn in Glastonbury. The show will include sets from ThinMan and the sTranGe daZe Band", Russell Webb and "Sakara".

Here is the link to the song to listen to

Laura also is a singing coach, Hypnotherapist and runs a variety of creative & expressive workshops and self-development courses for mind body and spirit.

Her music is available to buy at her website www.ladysakara.co.uk

And you can find out more by visiting her Facebook page at: