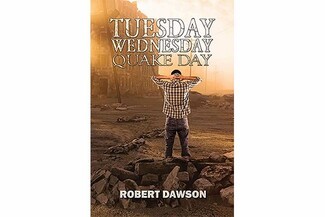 Tuesday, Wednesday, Quake Day, by Robert Dawson is an imaginative book that provides its audience with a unique and rarely captured story from the point of view of a young Traveller/Romany boy who is struggling with the prejudices of children at his school and the wider community. The story, told from the point of view of a boy called Tom Morrison, is about an earthquake in his hometown of Marsh Meadows, and how he and his ‘girlfriend’ (don’t say that or she’ll slap him) Nat, must save Tom’s little sister, Luckry, who has gone missing during the quake.

In my opinion, the story was underdeveloped and a little far-fetched, but nevertheless, it was enjoyable and I devoured it in one sit-in. I looked past the simplistic storyline, spelling and grammar mistakes and saw the unique point of view with which Robert Dawson tells the story. Overall, perhaps not a book that I would read again, but one that I am glad I did.

The children are adventurous and distinctively written to contrast each other, yet making the reader yearn for them to come together, save Luckry, and realise their love for each other along the way. Such a particularly interesting, refreshing read is not often found, and it is rare to find an author who can write in such a way as Robert Dawson so obviously can.