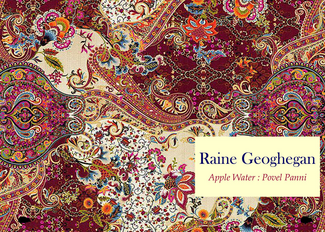 Apple Water has the distinction of being the first solo collection from the newly formed Hedgehog Press. For that reason it has quite a weight of expectation placed upon it, but one that it is more than able to meet.

What strikes you immediately about Apple Water is how sumptuously it has been produced. It’s far more robust than the average pamphlet and the glorious, bright paisley cover, contriving to be both homely and exotic, appeals to the eye and beckons you to pick up the book and open it.

The title of the collection alone is beguiling, drawing the reader in with the promise of freshness and sweetness. It also encapsulates a dialect which has an inherent poetry. Apple Water or Povel Panni rendered in jib (Romani language) refers to Herefordshire, known among travellers as Apple Water Country. Romani words are used throughout the collection, adding richness to the writing which broadens the boundaries of received English. Such vocabulary preserves a marginalised and vital language, one that is in danger of disappearing, and  illuminating the writing with a fluid energy, like the opening poem, Romanichals in the 1950s (i) that fairly sizzles with jib:

I admire the energy of this, its brio. For those of us who are not familiar with Romani, a footnoted glossary is helpfully provided on every page. Knowing the meaning of each of the dialect words, however, primarily serves to reinforce how much aural impact the words have compared to the corresponding English.

Apple Water is part memoir and part poetry collection, covering a range of reminiscences and evocations of Geoghegan’s Romani background rendered in prose, poems and songs. She draws very much upon an oral, folk tradition and this invests her work with a vitality and clarity that makes her writing very accessible. This is evidenced particularly in the songs, such as Gypsy Lullaby:

I’ll sing you a lullaby

how peaceful you lie.

Apart from possessing a fine ear, Geoghegan has an imagist, painterly eye for capturing a scene with a lucidity similar to that found in Chinese poetry or Japanese haiku, as in these lines from Strawberry Picking in Kent (Tanka):

on her back, red juice seeping

While borrowing forms from other cultures, such as tanka and haibun, Apple Water is very firmly set in the English pastoral tradition. Her poems strike me as the equivalent in words of the paintings and etchings of Samuel Palmer. Geoghegan has the knack of placing the reader in particular situations with the most delicate of touches:

You’re in the orchard,

sitting on the grass

with the woody scent of apples and earth,

a basket full of Worcester Pearman’s at your feet.

You take the smallest one,

wipe it on your purple apron,

lean your head back to catch the sun. 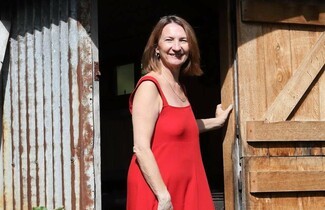 The evocation of Romani life albeit nostalgic does not ignore the negative aspects, particularly in the depiction of the harassment that the travelling community has often been subject to. Geoghegan captures this in Keep Movin’ which deals with a police raid on a camp site. However, what shines out throughout the book is the celebration of the travellers’ world as it was then. This is captured in the almost defiant stance of To Be a Romany, a dramatic monologue where the speaker looks back on how Romani life used to be, expressing this with energy and vigour:

We worshipped the ground that we walked on,

All this and more.

I’ll tell you what it was like to be a Romany in the old days.

It was bloody kushti.

Bloody kushti seems to me to be an apt summary of Apple Water as a whole. This collection, I am sure, will put Raine Geoghegan on the map not only a spokespoet for the travelling community but as an excellent poet in her own right.