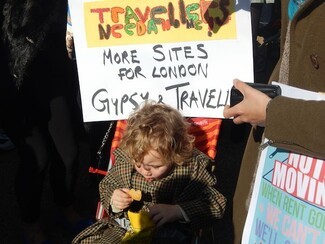 Gypsy, Pavee and Traveller organisations and campaigners have come together to condemn racism against Gypsies and Travellers in the wake of a damning major report on racism recently released by the Equalities watchdog that warned of “increasing racial tensions” against ethnic minorities.

The report, by the Equalities and Human Rights Commission, is called ‘Healing a divided Britain’, and represents the biggest ever review into race inequality in Great Britain.

The report singles out Gypsies and Travellers as being the most discriminated against ethnic groups in many of the areas it covered and puts the blame squarely on the government’s failure to make progress against discrimination and on the media’s biased reporting of Gypsy and Traveller issues.

The Equalities Commission summarises the stigmatisation that Gypsy, Traveller and Pavee people face in their every-day lives and states that:

“Discrimination and harassment of Gypsies, Roma and Travellers is common across Britain, not only on the part of the general public, but also by the police and other authorities.”

The Traveller’s Times contacted Gypsy, Pavee and Traveller campaigners and charities and asked them to comment on the report by The Equalities and Human Rights Commission and to highlight the work that they are doing to combat discrimination, prejudice and racism in the areas that the report covered. Their responses will form part of a series of features that we will run over the following weeks. The second of those responses – from the London Gypsy and Traveller Unit, is below:

The London Gypsy and Traveller Unit

The London Gypsy and Traveller Unit is a London-based charity with a mission to support, empower and represent Gypsies and Travellers on all levels.  Through our recent campaign We Still Count we worked together with Gypsies and Travellers and support organisations to challenge the new planning definition of Travellers imposed by the government. Members of the community have been actively involved in raising awareness of the damaging impacts of this policy change on future generations, by taking part in marches, submitting evidence through the formal consultation process and giving interviews to a number of media outlets.

We believe evidence can be a powerful way of exposing injustice and a first step in fighting for change. The EHRC report demonstrates yet again how deeply rooted discrimination and inequality are for ethnic minority groups and particularly for Gypsies and Travellers.  But while this evidence is gradually becoming more available and better publicised, we are still failing to see the much needed action from all levels of government to address these inequalities.

At a London wide level we work to provide evidence of the inequalities facing Gypsy and Traveller communities and make policy recommendations to the Mayor of London and London Assembly, through the London Gypsy and Traveller Forum. Over the last year the Forum held meetings to discuss accommodation, health, employment and education issues, producing a London Gypsy and Traveller Manifesto which was presented to the Mayoral candidates. This stresses the importance of adequate evidence to support inclusive policies and targeted funding to implement them, as well as a wider representation of community voices on decision-making committees and boards and London’s City Hall.

As governments come and go, they sometimes make fleeting promises to acknowledge and improve the situation of Gypsy and Traveller communities, but in reality many policy and legislation initiatives are making matters worse. Very often community groups and organisations working on the ground find it very difficult to make use of Equality legislation and the Public Sector Equality Duty to challenge decisions or seek the inclusion of Gypsies and Travellers in strategies and policies. While we welcome the Commission’s recommendations for a UK race equality strategy, we would be concerned if this was simply an exercise in writing policy with no tangible outcomes. The EHRC has an essential role in scrutinising governments and holding them accountable and we believe this role should be strengthened, with more resources and power allocated to allow the Commission to see such a strategy adopted and implemented.