PONTINS BLACKLISTING OF IRISH AND IRISH TRAVELLERS - A LEGAL BRIEFING

A legal briefing on the rights of Gypsies and Travellers in relation to the recent Pontins Traveller blacklist revelations, by Marc Willers QC and Gráinne Mellon from Garden Court Chambers

Ethnic Gypsies and Travellers have been entitled to protection from discrimination under equality legislation for many years yet they continue to experience racism in all walks of life. The latest example of what has become known as ‘the last acceptable form of racism’ came to light on 2 March 2021 when the Equality and Human Rights Commission (EHRC) issued a statement in which it disclosed the fact that Pontins had been using discriminatory booking practices, including an ‘undesirable guest list’ or ‘blacklist’ in order to exclude Irish Travellers, Romani Gypsies and others with Irish surnames from their holiday sites.

The EHRC stated that it had signed a legally binding agreement with Pontins’ owners, Britannia Jinky Jersey Limited, which requires Pontins to:

The EHRC added that it will monitor Pontins’ actions to make sure it complies with the agreement and made the point of saying that it has the power to launch a full investigation under section 20 of the Equality Act 2006 if Pontins fails to do so.

Whilst it is good to see the EHRC take action in this case there is a concern that leaving Pontins to put its own house in order may not ensure that Pontins mends its ways and that the sanction imposed was not strong enough to deter other service providers from similar conduct in the future.

Putting those concerns aside, where does this revelation leave those Gypsies and Travellers (and Non-Traveller Irish people with surnames on the blacklist) who have been refused accommodation by Pontins and believe they may be victims of its discriminatory policy?

As a company providing a service to the public, Pontins has a duty under section 29 of the Equality Act 2010 not to ‘discriminate against a person requiring the service by not providing the person with the service’ and a breach of that duty is unlawful and can result in civil liability.

If a person considers that he or she has been the victim of Pontins’ discriminatory policy, then legal advice should be sought on whether the circumstances amount to unlawful discrimination and an action may be brought under the Equality Act 2010.

Legal aid is available for discrimination claims in cases with merit and where an individual has limited means. Funding assistance may also be provided by the EHRC in cases which may set a legal precedent or address widespread or systematic discrimination issues.

Cases involving race discrimination by service providers are heard in the county court as happened in well-known case of Traveller Movement and Others v JD Wetherspoon Plc in which the court concluded that Irish Travellers and Romani Gypsies had been the victims of discrimination when they were refused entry to the Coronet pub after they had attended a Traveller Movement conference.

The time limit for bringing a case are strict. Ordinarily cases must be filed within six months of the act of discrimination about which complaint is made - though the court does have a discretion to extend the time for bringing a claim when it is ‘just and equitable’ to do so. Given the fact that the EHRC did not disclose Pontins’ conduct until 2 March 2021 it may well be that the court would consider it just and equitable to extend time until 1 September 2021 for anyone claiming to have been a victim of Pontins’ discriminatory policy and refused accommodation in the past. 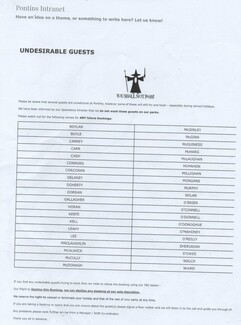