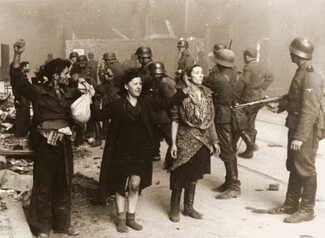 Today is the anniversary of that evening in 1944, when over 6000 Roma and Sinti stood up to the Nazi SS in Auschwitz-Birkenau and delayed the liquidation of the ‘Gypsy camp’ (zigeunlager) by fighting off the soldiers sent to take them to the gas chambers.

The concentration camp prisoners had received a tip off and so mobilized and united together, making crude weapons from whatever they could.  In fact Roma often  resisted the Nazis by  fighting back in whatever small ways they could, sometimes by singing and many gave their lives believing it was better to die free than live as slaves to the Nazi regime . This should make us proud and give us hope and those are the sentiments that this anniversary will bring forth. Sorrow, pride and resistance in the face of adversity, and hope for a better future.

It is shocking that even now in 2016 there's no official memorial to the over quarter of a million Roma and Sinti Gypsies killed in the World War 2. In fact Europe only acknowledged the Roma genocide last year!  The U.K.  Holocaust commission was also formed last year by the Conservative Government and it does not have one single Gypsy or Roma member. On top of this the special envoy for "holocaust issues"  is Sir Eric Pickles,  who was found guilty in the High Court of discriminating against Gypsies and Travellers for singling out Gypsy planning applications, and taking them off his own Department of Communities and Local Government planning Inspectors to determine himself.

The purpose of this commission is to ensure that the memories are kept alive, yet there is no recorded testimony of any Gypsy holocaust survivors, no plans as to how the Roma and Sinti will be acknowledged in the new £15 Million Imperial War Museum wing due to be built for the Holocaust Exhibition.  There is also no specific inclusion of Roma or Sinti on the memorial to be built in Victoria tower gardens next door to Parliament.  Not even an official ceremony for remembrance of the Gypsies and Roma murdered just for their race. This is not acceptable and we need to continue to fight back until this is changed.

Herts GATE is joining the campaign to change all that – a campaign that has been going on for decades. There have been some successes in Europe – but in the UK there needs to be a concerted push this year. Over the last few months we have been working with many well-known champions of this cause such as Rainer Schulze , Ruth Barnett, Angel Ivanhoff, Gratton Puxon, Amanda Sebysten and many others, and over the next three years we intend to unite and lobby to ensure that the Roma and Sinti genocide will be officially  acknowledged in the UK. Despite many letters being written to the current Prime Minister David Cameron asking why Roma and Romani are not being included or considered – there has been no response as of yet. This is not fair or right.

Annually there is a very moving service organised by The Gypsy Council in Hyde park to remember the night of August 2nd 1944, when the Nazi SS returned to the zigeunlager and succeeded in murdering the remaining 3,000 inhabitants of Auschwitz-Birkenau, but this is not official, nor is it attended or acknowledged by any Government representatives.

The struggle for the recognition of the Roma and Sinti genocide has been going on for decades in the face of official indifference. The first community organized commemoration took place in 1967 in Bethnal Green, London, where Johnny Connors sang a poignant lament as a bender tent was burned in the memory of the Roma and Sinti Nazi victims. Gratton Puxon, a speaker on the day, recalled how Britain had come close to invasion by Nazi Germany, and that the Nazi high command had drawn up plans under “Operation Sea lion" to round-up all the Gypsies and Travellers in the UK – alongside the Jews - to continue their evil crusade of genocidal extermination.

Individually we must request that our local communities remember these dates – May 16th, the day of resistance, and August 2nd – the day of sorrow.

As a group we will fight for recognition we need to demand answer we will lobby for answers acceptance and acknowledgement. We must look to the Jewish community for help as well – the other victims of the Holocaust – who are officially remembered.

This August GATE Herts will be taking a group of young people to Auschwitz to join with 400 other Roma from across Europe to remember and attend a service. Please contact sherrie.GateHerts@gmail.com for further information.

Looking further ahead, in 2019, we will mark the 75th anniversary of August 2nd. We must have official recognition of 2nd August in the UK by then. The journey towards that includes a representative on the Holocaust Commission and engagement by the Holocaust Memorial Committee.  It must become an official day of commemoration of the Roma genocide. We owe this to each and every victim, so that their memory will live on and so future generations can learn what hatred, stereotypes, ostracizing and isolation can do if left unchecked and unchallenged.