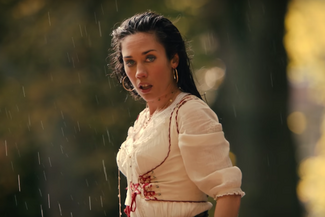 Like many Travellers, I was completely horrified when I watched Ricky Gervais' Lady Gypsy video. What gives Ricky the right to make profit out of Gypsy stereotypes? Or better still, why the inaccurate and downright ugly portrayal of Romani women?

After watching the video, I felt an array of emotions, mostly anger and disgust, yet still... I couldn't bring myself to take it all in until later on, where I asked myself the following: what makes Gervais any different to any of the others singing from the same appropriation hymn sheet?

For one thing, his stance on equality is pretty solid. Being an avid supporter of animal rights and an LGBT rights activist, you'd think that he would be the last person to make a joke out of an oppressed group of people. But is this video really oppressive? Or just a bit of harmless fun?

His video, which features in the film David Brent: Life On The Road, is about Brent's encounter with a Gypsy Lady. Satire aside, members of the Travelling community have called Gervais out on the video, stating that lyrics like “the sex is free, but the heather's a pound” are degrading towards Romani women. On Twitter his only defence is to blame the offensive material on his character David Brent: “You clearly haven’t seen the office or the new movie yet. Relax. He accidentally insults everyone.”

The irony of his argument is that his character wouldn't be allowed to insult anyone, but one blogger from the National Alliance of Gypsy Traveller & Roma Women believes that he's playing on the romanticised Gypsy image and knows all too well the impact it can have:

“The inclusion of the words 'she was pretty – and clean' clearly demonstrate that Gervais is indeed fully aware of the ‘dirty Gypsy’ stereotyping and is quite happy to quite literally cash in on that.”

A bit of harmless fun, then? I hardly think so, but sadly this video won't be the last we see on the misrepresentation of Travelling peoples, especially where portrayal is concerned. We've seen time and again how harmful the Gypsy Wedding effect is on Travellers and how much distortion media can cause.

In fact, the latest report on Gypsies and Travellers from the Equalities and Human Rights Commission tells us that media still plays a part in fuelling the bias towards Gypsyies, Roma and Travellers. It mentions an opinion piece by The Spectator calling out Gypsy's, Roma and Travellers for being “lazy” and “unintelligent.” The report also gives us a shocking insight into the inequalities still faced by Travellers stating that 14.1% of Travellers describe their health as being 'bad' or 'very bad'.

I'm starting to see a pattern emerging from all of this. You stereotype a group of people, throw insults at them and then they continue to face poor health and inequality due to lack of support from the outside world. And as long as there are videos like this out there, then the fight for positive representation will only get harder. Perhaps then Ricky Gervais will realise the wounds he's inflicting on such an oppressed minority.