A Foregone Conclusion? Why we should campaign against Ricky Gervais’s ‘Lady Gypsy’ 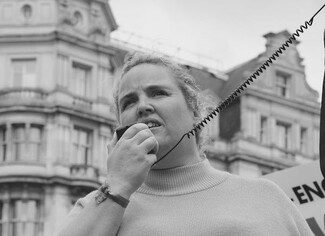 When I first saw on my newsfeed that Ricky Gervais and his band ‘Foregone Conclusion’ had released a pop video called ‘Lady Gypsy’ as a trailer for his new film, ‘David Brent: Life on the Road’, for a second I actually thought it would not be the usual negative media portrayal promoting racism.

Ricky Gervais is known for his support to many charities and the causes he supports ranges from Cancer support, refugees, to his love of animals, so I was shocked when I watched the video. Every single aspect of it just seemed so wrong.  Romantic stereotypes are not real, perhaps associated with an idea of the “good old days” at in Victorian times, and they do us more harm than good.

The outfit Ricky Gervais’s ‘David Brent’ character is wearing in the three minute video is blatant ridicule; a neckerchief, belted trousers with a close up lingering shot of the work boots he’s wearing. The “Lady Gypsy” is adorned in an ankle length long flowing skirt, with a shawl and is a racist and sexist stereotype. The lyrics are even more disturbing; “She was a Traveller BUT she was pretty and clean”. So it goes on and she lays him down on a bed of heather offering free sex but selling the heather for a pound. Is it worse that she is immoral or that she’s motivated by money?

I was outraged and decided to visit Gypsies and Travellers on sites in Hertfordshire to canvas and see if I was being over sensitive (you can become cynical as an activist for Gypsy Traveller rights). Mary Wall from Hatfield was concerned as to how and who did the research on this as it would cause so much damage like Big Fat Gypsy Weddings did, and it seems to hint that we are “prostitutes with cheap morals”.  Leanne Wall age 15 added “Ricky Gervais is picking on a culture that’s already down and then kicking them. Everyone will see this and children will get ridiculed at school.” Lisa & Caroline from Potters Bar agreed it wasn’t very nice, nor very Christian or true, and was going to make things even harder.

A community worker from Wales also messaged the Face Book page Report Racism GRT this morning telling us how she was at the cinema last night watching an age 12 certificate film and this video was shown. She told us that she complained to staff. Why should our children have to see this when they go to the cinema?

Ricky Gervais justified it by saying that the viewer is meant to laugh at the David Brent character’s racism and has ridiculed Pavee campaigner Bernard Sweeney on Twitter, telling him: “David Brent is racist get it???” The trouble is this video will be watched by people who have never seen David Brent in the TV series The Office. Just over 6.5 million people in the UK watched the office at its peak for 2003 Christmas special, yet there is over 65 million people living in the UK. The David Brent characters ignorant comedy racism shtick will not be understood by the masses.

The climate of hatred, intolerance and spite in Britain currently is spiralling out of control and the very last thing we need is this negative racist portrayal. Shame on you BBC for using Gypsies and Travellers license money to inflate the bank balance and stroke the ego of the double standards of Ricky Gervais at the expense of the UK’s most down-trodden ethnic minorities.

But we don’t have to take this lying down – like the ridiculous ‘Lady Gypsy’ – this video is offensive to women and to Romany Gypsies.

Here is what we can do:

Let’s all complain to the BBC.

Let’s all boycott the film, and if you see ‘Lady Gypsy’ being shown in a cinema as a trailer, then make sure to make your feelings known to the manager.

And finally, let’s all demonstrate at the film premier in London.  I wonder if he would find it so funny is some real ‘Lady Gypsies’ turned up to accuse him of racism at the West End opening night? I know the Gervais probably wants publicity for his film – but accusations of racism are not good publicity and mud sticks.

We should stand together on this and if we don’t kick up a big, noisy fuss, then it is certainly a foregone conclusion that some other has-been comedian will only see the lack of response from us as a green-light to pick on us when they need to ridicule a minority group to boost their flagging career.