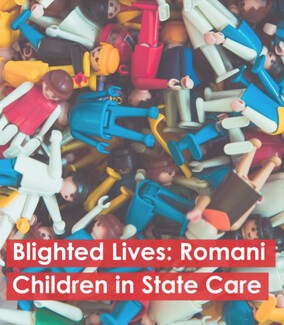 According to a new report by the European Roma Rights Centre (ERRC) long-term institutionalisation of young children is a form of violence and the disproportionate numbers of Romani children taken into state care amounts to a form of racist violence.

While for centuries, racist folktales warned children not to wander into the woods lest they get ‘snatched by Gypsies’, the historical reality is quite the reverse.  It is Romani children who have been kidnapped by the authorities and separated from their parents; kidnapped and placed in orphanages by authorities bent on forced assimilation, or in the case of the Nazis and their allies, gruesome experimentation and annihilation.  In the democratic 21st Century, disproportionate numbers of Romani children are removed from their biological families and placed in institutional state care.

The ERRC new report Blighted Lives, which builds on a decade of fact-finding and legal challenges to such discriminatory practices across a dozen countries, found that very many at-risk Romani families do not have access to social supports, and preventative measures remain scarce, often non-existent in deprived regions where the need is greatest.

Despite the declared lack of ethnically disaggregated data, the research shows that for example in Slovakia, where Roma account for 6-8% of the total population, an estimated 63% of children in state care were of Romani origin. Roma in Romania make up 8.32% of the total population, but the overrepresentation of Romani kids in care ranged from 35% to 75% according to the region.

While the law prohibits placing children into care just because their families are poor, appalling housing conditions and child poverty are still the most frequent reasons for removals across the different countries. When asked about the reasons why children are taken into care in Slovakia, social agency heads and social workers deny that ethnicity plays any role in removals, and go on to cite reasons such as “parental neglect, truancy, theft of firewood and potatoes, healthcare concerns, family tragedies, and ‘other pathological phenomena in the locality’ including drug and alcohol abuse.”

As in other countries, the structural racism that reproduces such extreme poverty that puts many Romani families ‘at risk’ goes largely unquestioned, and the system which dumps hugely disproportionate numbers of Romani children into state care institutions goes effectively unchallenged.

Many children are caught in a cruel snare of poverty and racism, where institutional discrimination and dysfunctional child-protection systems result in huge numbers of Romani kids being placed in state-run care homes, where there is precious little by way of care. Worse still, some of these vulnerable youngsters become victims of abuse and exploitation.

In 2018,  BBC documentary-maker Stacey Dooley revealed the shocking plight of Romani children in Hungary, taken from their families and exposed to violence and sexual exploitation within the care system. She met with distraught mothers whose children had been taken into care, who spoke of their powerlessness to protect their children from abuse in the institutions.

One mum described the situation as “the stuff of nightmares”, others spoke of how they lived in fear of mayors or other authority figures who had threatened to take their children away. It became clear that this threat operates as a means of social control and coercion, made all the more real because of the hugely disproportionate number of Romani children taken into state care.

In North Macedonia, the ERRC took action following disturbing reports of neglect and sexual abuse of Romani minors in Skopje’s ‘25 May’ children’s home. In one case, a thirteen-year-old had to have an abortion after being abducted and held for 30 days before she managed to escape. The care authorities did not report her disappearance to the police or parents.

In her testimony to ERRC, the victim described how when she reported a previous sexual assault to care-workers she was accused of lying and making up stories. This time, however, the abuse scandal led to criminal prosecutions, top-level resignations, disciplinary actions and condemnation from the Prime Minister.

There are, in all communities, circumstances in which it is in the best interests of the child to be removed from the family, but such decisions must not be skewed by ethnic prejudice, and should not be determined by poverty. Removals have a traumatic impact on family life, and states must move to eliminate large institutional care homes for children.

It’s time for effective deinstitutionalization, understood in terms defined by UNICEF as, “the full process of planning transformation, downsizing or closure of residential institutions, while establishing a diversity of other child-care services regulated by rights-based and outcomes-oriented standards.”

Across the countries surveyed, as many as one-third of children in state care had spent 90% of their entire lives inside the system. While it is very easy to be sucked into the system, it is virtually impossible for many Romani children to escape it until they came of age. For the majority, the institution is the only family they know; and ‘the institution’ is deeply damaging. According to UN expert Dainius Pūras, the institutional culture “that unavoidably inhabits and infiltrates residential institutions for children may be considered as equivalent to a culture of violence.”

The body of evidence shows that children with disabilities and those from ethnic minorities suffer more than others inside large institutions. According to Pūras, “institutional care has devastating effects on nearly every domain of functioning, and yet children, including very little and especially vulnerable children, are still being brought up in institutions. All the efforts should be made to ensure that infants and young children do not enter institutional settings.”