The Day Democracy and Freedom Died? 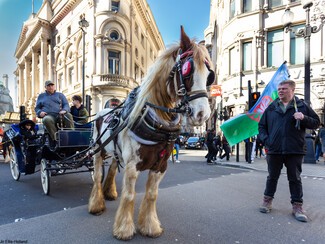 The 27th of April may well go down in history as the day that freedom and perhaps democracy itself died. Because yesterday the Police, Crime, Sentencing and Courts Bill received Royal Assent and has become law. The law Drive 2 Survive was set up to stop is now real and with it has come vastly increased powers to persecute nomadic Gypsies and Travellers. So what now? Do give up and accept our fate? No chance.

“Part Four is a direct assault on the traditional way of life of Gypsy and Traveller communities,” says Drive 2 Survive co-chair Sherrie Smith. “It creates a new offence of criminal trespass with ‘intent to reside’ will be created with fines of up to £2500, along with the seizure of homes and imprisonment as punishment. It likely to traumatise and brutalise families that simply have nowhere else to go.”

So Drive 2 Survive have received funding from the Joseph Rowntree Charitable Trust to provide mobile human rights advocates who can directly advise people of their rights when having the new law enforced against them. The mobile advocates will also be gathering evidence of human rights abuses for Gypsy and Traveller lawyers who are poised to bring strategic legal challenges against the harsh new law. The advocates will work with Gypsies and Travellers from every background because Drive 2 Survive believes the law is a direct attack on the human rights of all.

So if you feel that your human rights as Gypsies and Travellers are being abused by this or any other law we want to hear directly from you. If you want us to advocate on your behalf you simply need to call us on our dedicated mobile hotline below. 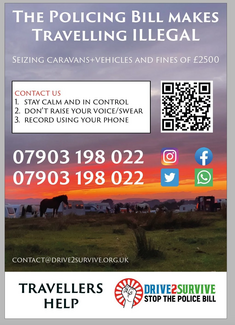 This article was first published on the Drive 2 Survive website at: www.drive2survive.org.uk