Can a book steal your heart? This one just stole mine! 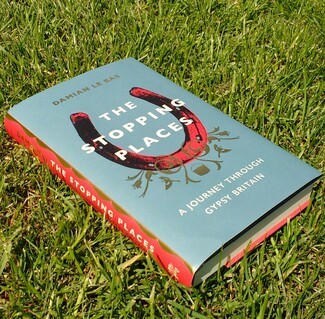 “I began to wonder if the ‘Atchin Tans’ (stopping places, camping grounds) were the missing key to understanding the psyche, the soul, of my people. It was all reduced to a simple truth: you can never understand Gypsies (Travellers) unless you understand where they live, and where they have lived.”

A brilliantly clever storyteller and academic, Damian Le Bas weaves and winds his Romany roots from one ‘Stopping Place’ to another, with visions of the Gypsy spirit. He learns from each area about what sort of skills guided the wanderer across the land, introducing ‘history’ as he goes along. He thought he knew all about ‘stopping places’ but it is clear it is where he learns about the culture from those places. He says, “Over the years, in England and across the Old World, theories arose as to the origins of the Gypsy. The Elizabethan playwright Ben Johnson referred to them as ‘Moon-Men in a play; others suggested the Gypsies were a lost band of Jews, or conversely, that their ancestors were survivors of the destruction of Sodom and Gomorrah, or the fabled lost city of Ur of the Chaldees. A connection to the Sigynnae-a tribe of charioteers mentioned in Herodotus.” Damian is not suggesting any of these, he simply throws it in the air.

I was in tears when I read of his episode as a tiny child embroiled with a bully, and his Dad lifted him above the problem by putting him on his shoulders and walking home. He travels to Scotland to visit a few old camping grounds and visits Skye where he walks into the Coullins, finds a high place, lies on his back and says: ”I could die here in peace,” He refers to the resident crows, tough birds to live so high up who even mocked his retreat as he escapes the horseflies.

He wanders off his high place and decides to delve into the Jacobite history and Rob Roy then he remembers an old Irish Travellers who says: ”Millions of pounds they spend, the country people, with guns and bombs, killing each other and they think the real problem is us lot parked on a verge.”

He watches everything, green algae at the bottom of a stream minds him of Nan, whose brothers went swimming in a freezing burn and got pneumonia and damaged their eyesight . He is made aware from Nan Shepherd of the dangers existing in the mountains. He talks of Sheila Stewart and her achievements and her mother Belle, he even includes the ‘Berryfields’ of Blair song. Old Robin Shaw, the Gypsy and his three sons, were hanged at the Grass-Mercat for murder but that is usually how it is for people who live on the rough edge of civilisation.

This book is packed with facts and stories and laughter and tears fall from the pages as easy as an April shower. Many tales are not very well known which makes it an eye-opener but it is a brilliant piece of art and I have no doubt that it will lift many rewards and be read by all. I cannot put into words how strong I feel about this book, perhaps if I say; it should be read by all Gypsies and Travellers and police forces, politicians and the man in the street. To the anthropologist who thinks he/she knows all there is about the culture, I suggest they get a copy and educates themselves on the heart of the country’s Gypsy/Traveller people, so eloquently penned in this book. Damian leaves no stone unturned and he lifts each one gently and respectively taking readers into and onto the road of the Stopping Places.

In Scotland he finds the midges unbearable and refuses to leave his van, he says:"Thousands are whirligigging outside the van, which I haven't left for nine hours because I don't want to let them in. A few dozen make it in anyway, I spray on repellent, and light a couple of incense sticks. The noxious mixture sends the midges into confused fits, and makes me cough and splutter like Doc Holliday.”

When Damian visits the Tinker’s Heart, it sort of says it all really. He says: "It seems fitting that a monument of the Travellers is so unobtrusive: it is the opposite of grandiose, rising hardly above the earth, the ghostly white quartz easy to miss unless you know it's there".

“I began to wonder if the ‘Atchin Tans’ (stopping places, camping grounds) were the missing key to understanding the psyche, the soul, of my people. It was all reduced to a simple truth: you can never understand Gypsies (Travellers) unless you understand where they live, and where they have lived. To say they do not belong is a proven lie - the stopping places proved this assertion was wrong.

I can say this applies to the entire population of Travelling people all over these islands.

I am only partway through this wonderful book and it has, as I said, won my heart.

THE STOPPING PLACES: a Journey through Gypsy Britain' comes out on 7th June and is a Radio 4 'Book of the Week' choice.