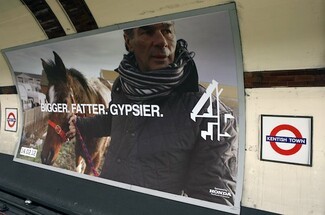 Elisabeth Blanchet is a professional photographer well known amongst Gypsy and Traveller circles. In fact Elisabeth was commissioned to shoot the stunning front cover for May’s edition of The Travellers’ Times Magazine that will be landing on your doorstep soon (if you are on our mailing list). Here Elisabeth talks about a commission for the promotional material for Channel 4’s BFGW back in 2011 – and the notorious ‘Bigger, fatter, gypsier’ billboards.

Last month, I was contacted by Professional Photography magazine: they wanted me to be part of their “Staged and Manipulated Images” debate at the Photography Show in Birmingham. I accepted but it brought back quite painful memories when four years ago I got caught in a fight between Travellers' communities and Channel 4 over pictures I took for their Big Fat Gypsy Weddings advertising campaign.

It all started in December 2011. Channel 4 hired me to do the promo shoots of their forthcoming Big Fat Gypsy Weddings 2ND series, which started on the 14th of February 2012.

‘1970’s Life Magazine style", one of the creative directors told me’

The brief I was given was appealing: they wanted me to work the way I usually do, spending time with people and shoot in a photojournalistic way. "The kind of 1970s Life Magazine style", one of the creative directors told me. They also added that they wanted to be as far as possible from me to really let me work as I usually do, to get the most natural pictures.

I took the challenge and spent more than one month going from from sites to sites photographing the Travellers who were featured in the TV show. They gave me a lot of their time and were very happy with the idea of appearing on big posters.

Each time I shot a new set of images, I would send a selection to Channel 4.They ended up choosing 4 images and without telling me, and then they printed the horrible "Bigger. Fatter. Gypsier." slogan on my photos….

They also manipulated two images: they cropped and reversed the photo of the two girls and therefore took it out of its party context. They also cropped the photo of the boy and made him look aggressive by darkening his look and eyebrows. Of course, they didn’t mention the manipulation to me.

When the posters came out it was a complete shock. I remember a friend calling me, saying: “bigger, fatter, gypsier, it’s you?” “What do you mean?” I asked. He said he had just seen a huge poster in Aldgate with one of my pictures and the slogan “Bigger, fatter, gypsier” on it.

I felt betrayed and so ashamed I couldn’t leave home for two days. The posters were everywhere, in everybody’s faces. Within days, more than 300 complaints were sent to the ASA (Advertising Standards Authority) against Channel 4 by members of the public and the Traveller community saying the billboard campaign was offensive and racist, an opinion I totally agreed on. But on the 22nd of February, the ASA cleared C4. "We did not consider the ads were likely to cause serious or widespread offence or be seen as irresponsible or harmful and will not therefore be taking any further action," the ASA said in a statement.

I clearly remember when the email was sent. It was an evening of early January: I received a phone call from one of the Channel 4 creative directors. He told me he was happy with what I had done so far, but wanted “more girls, more dresses, more exuberance, more staged images”. I was tired and had just got off the train from North Wales where I had been photographing more for the Channel 4 campaign. I replied: “Could you please write an email to me with suggestions, so I can have an idea of what you’d like”. I remember thinking “oh dear, they’ve changed their mind, they want more trash, more C4 usual stuff…”

“kissing with a dirty kiss’

Back home, I had an email from him in my inbox with a more detailed brief He wanted “a Gypsy couple kissing with a dirty kiss, a Gypsy girl - as young as you can - trying on a wedding dress far too big for her, the trail of a wedding dress coming out of outside toilets…” and a few more. I was shocked and replied the next day that the suggestions were the opposite to the brief I was initially given and I would never ask anyone to do anything like that. I went on to take a few more shots for the campaign but never staged anything they wanted me to.

When I realised how negative the consequences of the campaign and the actual series was, I started to think about exposing Channel 4’s racism by sharing that email. I thought the best way to do it was to use the media. I immediately thought about Time Out Magazine as I had worked for them for years. They agreed to run the story and expose Channel 4.

Six months later in October 2012, after stirling work by The Traveller Movement and David Enright (David won the Law Societies prestigious ‘Lawyer of the Year award for this), the ASA overturned their initial decision on appeal and ruled that Channel 4 BFGW advertising campaign was irresponsible, offensive and reaffirmed negative stereotypes and prejudice against Travellers and Gypsies. The ASA banned the poster of the boy and the one with the two girls.

Beyond the advertising campaign and the posters, the programme itself, the way it was shot, the way Gypsies and Travellers were portrayed, was far more diminishing and strongly reinforcing stereotypes lots of Gypsies and Travellers had been spending decades to fight. I really thought the Ofcom – the TV regulator - would ban or fine Channel 4 for BFGW, but they didn’t, and the Ofcom’s decision to dismiss the Traveller Movement’s complaint ended up in the High Court. When the judge ruled that Ofcom followed the correct procedure and that Channel 4 got away with calling BFGW an accurate portrayal of Gypsy life, It showed me how discriminatory the perception of Gypsy life still is in British society and how the racism and prejudice is institutionalized in many of the public authorities that are  - on the face of it - meant to protect them.