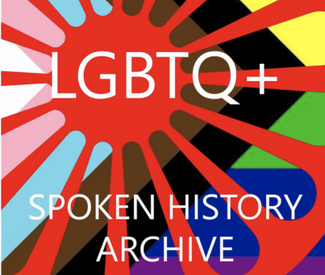 The Romani Cultural & Arts Company (RCAC) is proud to present a text adaptation of the online Gypsy, Roma and Traveller (GRT) LGBTQ+ Spoken History Archive. The publication follows the launch of the audio archive which was compiled through research carried out by the RCAC with the support of the European Roma Institute for Arts and Culture (ERIAC). The text version has been created with support from the Welsh Government and is intended to further disseminate insight into the experience of LGBTQ+ individuals from a variety of international Gypsy, Roma and Traveller communities.
This unique initiative brings to light the important, fascinating and often moving stories told by members of the global GRT LGBTQ+ community, highlighting the valuable roles that these individuals play in the rich complexity of Gypsy, Roma and Traveller life. The result is a dynamic online resource that not only documents and archives but also celebrates the intersectional heritage, culture and experiences of LGBTQ+ Gypsies, Roma & Travellers across the world.
This timely project has given a long-overdue voice to the often hidden GRT LGBTQ+ stories that our community members carry with them and at the same time offers greater insight into the wider Gypsy, Roma and Traveller experience—insight which feels particularly relevant during this current period of social isolation during a global pandemic.
The book was compiled and edited by Daniel Baker from interviews carried out by himself and Christine Virginia Lee; both of whom also appear as subjects in the book.
“We’ve been very fortunate that all 20 contributors spoke so openly and freely about their very personal and sometimes difficult journeys as Romani Gypsies who are LGBTQ+. I’ve learned through these interviews how important the Romani LGBTQ+ community is to many people. I’ve also realised more and more through these interviews, the wealth of talent, kindness and goodwill that exists within the community.” Christine Virginia Lee
“To embark on such an intimately personal collaborative project as the GRT LGBTQ+ Spoken History Archive felt particularly poignant during these current times of isolation. The archive will be a valuable resource for many who are beginning their journey as LGBTQ+ people across the variety of GRT communities.” Daniel Baker
Isaac Blake; Director of the Romani Cultural & Arts Company, said “This is a very personal project for me as a proud Gay Romani Gypsy. The Romani Cultural and Arts Company gratefully acknowledges the support of Welsh Government and the European Roma Institute for Arts and Culture in carrying out this important work.”
Category
News
Region
Wales
Tags
LGBT
Stories
History