Southend based based Adventure Island UK is still under pressure from Gypsy and Traveller rights campaigners after apologising yesterday for a post on its Facebook page stating that it had to temporarily close two of its attractions due to a “traveller invasion”.

How not to apologise!

The Adventure Island UK apology in full was:

“After careful reflection, we as a company apologise whole heartedly for any unintentional offence caused by our post.

We understand that the vast majority of the traveller population are hard working and decent individuals.

It’s such a shame that a small minority act unlawfully, causing disruption for both the travelling community and the community at large.

Adventure Island has and always will be a place that embraces diversity.

Again we reiterate we are very sorry for any offence caused”

The apology failed to placate many Travellers and supporters, with many pointing out that it was worse than the original statement.

“How not to apologise!,” said Alison Hulmes, commenting on the Travellers’ Times Facebook page.

“That 'apology' is insulting,” said Vanessa Hum. “Talking about it being 'a shame that a small minority act unlawfully' is just as racist and offensive as their initial post - it reveals a total bias in their impression of Travellers.”

“The ‘apology’ is as bad as the first statement,” said Lisa Thomson Brown. “In all areas of society it is the case that some people commit crime so why use this specifically to excuse their first statement. A wee bit of sorry not sorry there.”

Other Gypsies and Travellers contacted the Travellers’ Times to send us screen shots of insulting private Facebook messages that they say they had received from Adventure Island UK. 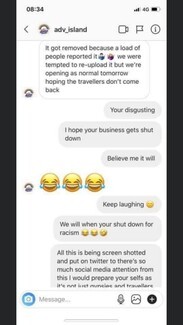 Gypsies, Travellers and supporters rushed to comment on Adventure Island post, appalled that a professional company could make such a statement in 2020.

“Shame on you Adventure Island UK!,” commented Samantha Jane. “This attitude and wording is inexcusable! I know Travellers that work hard, have respect and cause no trouble. If people were spitting and causing uproar that is down to those individuals. You cannot tar all with the same brush.”

“Good and bad in every race,” commented Joanne Smith. “Acceptable racism in 2020.”

Travellers are their bread and butter

“Travellers are their bread and butter and they will lose money because of this,” said Romany campaigner Sherrie Smith from Essex. “Only last weekend, because the weather wasn't that great, I said to the girls ‘come on let’s go to Southend to the amusement parks for the day’. It was half empty,” said Sherrie, CEO of  local charity Gypsies And Travellers Essex. "I can spot other Traveller families and they were the ones in the restaurants and on the rides spending the money.”

Adventure Island UK may now come under investigation from the Equalities watchdog because the post may have broken Equalities laws. The Travellers’ Times contacted the Equalities and Human Rights Commission who confirmed that a complaint had be received.

The post was also reported to the police as a hate crime by the Traveller Movement, the national charity and campaign organisation.

It’s time we started speaking up for ourselves

“I don’t think they understand the affect posts like there’s have it just gives people more ammunition don’t it,” Rosemarie Wilson told the Travellers’ Times.

“At the end of the day we want a better life for our children,” she added.

“I’m only 34 and the world is very different from when I was a teenager. In my first job I used someone else’s address so I could hide what I was. Now there’s no way I would hide what I am. It’s time we started speaking up for ourselves. We have heavyweight boxers, footballers and pop stars, why should we hide?”