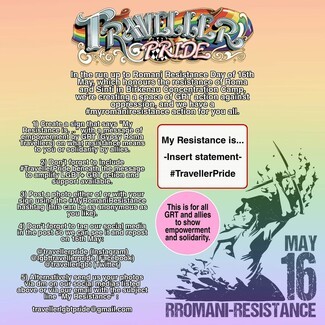 Traveller Pride needs YOU to get involved to help celebrate #RomaniResistanceDay2020  Traveller Pride want to show the world what Romani Resistance can look like. Big or small, personal or community, from Romanies or our allies.

On May 16th, 1944, the Auschwitz-Birkenau concentration camp saw a spark. That spark set a whole continent aflame.

That day, SS Guards surrounded the Zigeunerlager, or “Gypsy Camp,” at Auschwitz II–Birkenau with machine guns, ready to liquidate the camp and murder nearly 7,000 people.

The Roma and Sinti prisoners, however, despite being engulfed by the daily reality of death in the camp, chose life. When the SS commando unit called for Roma and Sinti to leave the residential blocks, they were met with prisoners who refused to come out, barricading the doors and fashioning work tools, handcuffs, knives, and rocks into weapons. The SS unit called an end to the stand-off and retreated, and the “Gypsy Camp” at Birkenau maintained their survival until August 2nd.

This radical act of resistance by the Roma and Sinti prisoners of Auschwitz-Birkenau became memorialized as Romani Resistance Day. This event, along with many others that have become the pulse of Romani cultural and self-preservation, stands starkly against a continued narrative that Romani people are agentless victims, objects to act violently against, a focus of pity.

You can find out more about Romani Resistance day here: https://www.lgbttravellerpride.com/post/romani-resistance-day-16th-may-2020-my-resistance-is

Traveller Pride want to show the world what Romani Resistance can look like. Big or small, personal or community, from Romanies or their supporters, they want pictures of you telling them what you do for #RomaniResistance ready for 16th May. Send them to them on Instagram or Facebook or upload them yourselves and use the hashtags #travellerpride and #MyRomaniResistance

Feel free to nominate friends and people you'd like to get involved in #MyRomaniResistance when you post
They are looking forward to seeing how fab you all look!