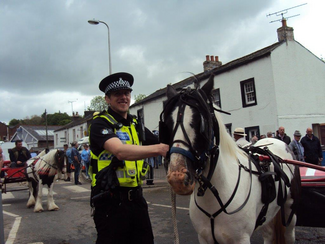 Critics say the advice does not go far enough.

In a letter sent to all police services in the UK – seen by the Travellers’ Times -  the National Police Chiefs’ Council (NPCC), a police advisory organisation made up of all police chief constables, has asked the UK’s police forces to instead look at other options to eviction.

“Current legislation affords the police and local authorities a range of powers to deal with unauthorised encampments, the use of which is discretionary subject to a range of factors, as outlined in the advice,” states the letter from the police chief’s council.

“This would allow families much better access to health care, whilst remaining in locations for longer will help reduce the unmanaged spread of the Covid-19 virus.”

The police chiefs also say that police services should work with councils during the coronavirus crisis.

“Additionally there is the concept of ‘negotiated stopping’ which has been deployed in many areas of the country. Negotiated stopping is an innovative way of addressing problems raised by the lack of suitable provision for Gypsy and Traveller accommodation,” they say.

“It involves local authorities and other landowners making an agreement with Gypsies and Travellers on matters such as facilities and waste disposal, whilst allowing unauthorised encampments on land that is not contentious.”

He said that the police chiefs should tell police services to not evict Traveller camps in any circumstances, and that they needed to state this clearly and firmly and provide leadership.

You can read the NPCC letter by downloading it from the link below: