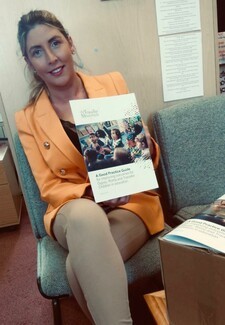 On April 30th we held our education roundtable in the House of Lords, kindly hosted by Lord Young of Norwood Green........writes Christina Kerrigan, Community Development and Partnerships Officer at the Traveller Movement.

I was on the panel to speak about our education and advocacy project and do a short presentation on our new Good Practice Guide for improving outcomes for Gypsy, Roma and Traveller children in education.

The good practice guide provides information on how to support Gypsy, Roma and Traveller (GRT) pupils in mainstream education, and provides examples of what good schools are doing to support their GRT pupils.

In my opinion this is the most important project we have worked on as education is the key to solving a lot of the issues our communities face. Through this advocacy project we have helped hundreds of Gypsy and Traveller children who otherwise would have suffered in education or be left out of education.

Our advocacy project ran over three years. The types of cases we worked on related to attendance, discrimination, exclusions, home education, funding, transport and bullying. Bullying cases were the most heart-breaking and infuriating. Children were bullied not only by other students but also by their teachers. However, our most time consuming casework was admissions and transfers. We received so many calls each September from families who needed help filling out forms, and who struggled with their literacy. We also helped families who were digitally excluded – either they lacked internet access, or they had poor computer skills. Most school forms need to be filled out on line these days, as do most requests for school dinners, school admissions, or applications for school transport.

Also on the panel was TM trustee Pauline Anderson. Pauline is also the Director of learning and Skills at Derby City Council and she discussed the excellent work they were doing at the local level to challenge exclusions, off rolling and bullying of GRT.

Emily Frith from the Office for the Children’s Commissioner spoke about their research into elective home education and off-rolling, an issue which is very relevant for our communities. Elective home education (EHE) statistics went up by 27% since last year and have more than doubled since 2014. This is because many parents feel schools do not meet their children’s needs and some schools have become unsafe for many children. This is something we also hear quite a lot of in our education project. Mums are more afraid for their children’s safety while at school rather than their grades or attainment.

Professor Kalwant Bhopal from the University of Birmingham discussed the failings of the Equality Act in tackling racist bullying. Since the introduction of the Act it is no longer a legal requirement to report racist bullying, meaning schools are essentially failing on race equality. She also suggested that a failure to acknowledge racism, leads to a failure to act. This is something we see the whole time in our education case work. Schools turn a blind eye to racist bullying, or they ask Gypsies and Travellers to change their behaviour to fit in more. They never acknowledge that it was racist bullying in the first place.

Dan Rosenberg partner at Simpson Millar discussed his work with Traveller pupils who had been excluded or who were fighting to get their education health and care plans.  Dan said exclusions against Gypsies and Travellers are usually as a result of retaliation due to unaddressed racist bullying and that many exclusions were unlawful. Not only are exclusions harmful in terms of academic attainment; they also have a serious impact on the mental health of pupils, but girls in particular.

Finally Mark Sims from Ofsted discussed the new school inspections framework and how Ofsted will now monitor the quality of the curriculum rather than outcomes. It was felt that this could go some way to address off-rolling and could prevent schools from gaming the system.

You can download our Good Practice Guide for free here