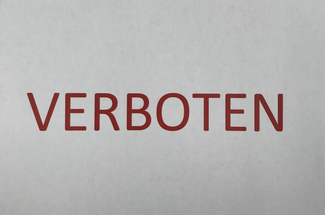 The posters, written in German, contain phrases which echo Nazi slogans such as ‘Sieg Heil’ and ‘Gypsies Verboten’, which translates as “Gypsies forbidden”.

Dr Siobhan Spencer, MBE, CEO of the Gypsy and Traveller lead National Federation of Gypsy Liaison Groups, said that her organisation thoroughly condemned the signs which she said were reminiscent of Nazi Ideology and design. 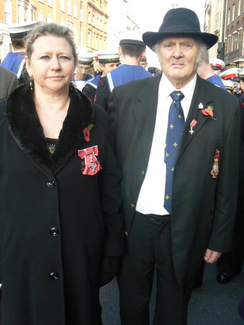 “It is a sorry sign in the society of today that someone thinks it is acceptable behaviour to carry out this activity,” said Dr Spencer.

“No one knows how many Romany Gypsy people were killed during the Holocaust, it is believed to be between 500, 000 to 1 million.”

“On August 2nd the commemoration of 3,000 men, women and children murdered during the last nights of (the ‘Gypsy camp’ in) Auschwitz is commemorated by many Roma peoples across the world. The education of the Holocaust is extremely important and all the more reason why NFGLG support the new Holocaust learning centre proposed by the Government, alas it is sadly needed.”

Police are investigating the posters, which have appeared on bins, road signs and around the village.

One poster declared: “Aug Answeisung Von Barns Green Kirchengemeinderat,” which translates as “by order of the parish council”

Itchingfield Parish Council includes Barns Green, and Chairman Penny Simpson told the Argus Newspaper that there was a recent appeal by a Gypsy site against planning enforcement taken by Horsham District Council. It was reported that the Gypsy site had lost its appeal.

Simpson denied that the Parish Council had anything to do with the signs. “It would seem to be some sort of backlash. I’m 100 per cent certain that the posters had been put up by someone from outside the village,” she said. 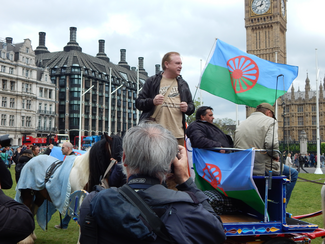 Phien O’ Reachtigan, Pavee Chair of The Gypsy and Traveller Coalition, had earlier also condemned the signs, calling them a hate crime, adding that “decent minded” local people would be “appalled and disturbed” by the signs.

“This is a hate crime, and we are outraged,” he told the Argus.

“It is the predictable outcome of the rhetoric we are hearing from MPs, councillors and people in authority. It puts ideas into people’s minds, and their comments encourage behaviour like this.”

“This has happened before, we saw 1930s Germany. Children from the Gypsy and Traveller communities are affected in schools, it needs to be stamped out.”

“There is no excuse for this. Any suggestion this is satire is outrageous, it is clearly a racist attack on an ethnic minority with German language and rhetoric suggesting links to Neo Nazis.”

“There are many decent minded people in the area who will be disturbed by these signs going up. We are a worrying step away from being on the road of verbal abuse turning into more serious attacks.”

Police say the signs appeared overnight on Sunday and Monday, and said officers have received several reports about the “hate” posters.