Gypsy and Traveller youth speak out at Labour Conference meeting 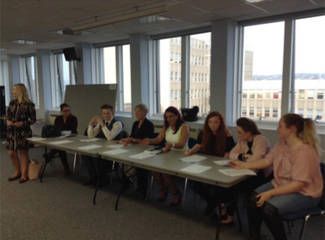 Gypsy and Traveller youth speak out at Labour Conference meeting

A leading charity hosts meeting at Labour conference for young people to have their say!

Friends, Families and Travellers held a meeting for young Gypsies, Roma and Travellers on Tuesday 26th September, as part of The World Transformed, a fringe festival which ran alongside the four-day Labour party conference in Brighton.

Kate Green, MP for Stretford and Urmston and co-chair of the All Party Parliamentary Group on Gypsy Roma Travellers, chaired the event and told the audience: “It’s exciting to hear the voices of the future leaders and future champions of the community.”

It was a packed event and all panelists put forward powerful speeches on major issues within the Gypsy Roma and Traveller community. Most centered around high levels of discrimination in education and barriers in access to mainstream services due to institutional racism.

Kate Green MP said it was ‘”really shocking, really outrageous” to hear of the problems faced by young members of the community. The Co-Chair of the Parliamentary group for Gypsies, Roma and Travellers added that she would feed back their concerns at a House of Commons debate on Gypsies and Travellers, which will be held on Monday, October 9th.

Young Romany Gypsy Campaigner Ben Bennet,14, told the audience: “Life is different for me because of a label that has been fixed for me, this label is meant to restrict me, but my label has given me strength, ambition and pride.”

He later told Travellers' Times: “It was a great opportunity to speak and listen to other youth in our community, a brilliant way to spend my Birthday!”

“Racism affects my education, socially and mentally,” she said. “It’s hard to make friends and it makes me paranoid.”

Ruby Smith added she had initially tried to hide her ethnicity at school and that – when it became known – she had stopped being invited to her friends’ houses. “I’m sure it is down to ignorance,” she said. “Teachers and pupils should have training sessions.”

She told the Travellers’ Times: “Every child will overcome racism but we need to help them take the first step”.

Another young Romany Gypsy activist Scarlett Smith, 13, told the Travellers’ Times: “I hope to be one day be considered normal.”

She spoke of how she was frequently called racist names at school: “Why are they getting away with it?” she said. “Most people would never dream of being racist, but it seems its ok when they do it to us.”

Scarlett Smith spoke of two trips she has taken to Auschwitz to remember the Roma who were killed in the Holocaust. “It amazes and upsets me that for Gypsies, not much has changed. I really want to help bring change for all of us,” she said.

Irish Traveller campaigner Rosie Toohey, 19, told the audience of how she is studying a degree in child psychology and echoed the call for more action to tackle racist bullying in school and shared her own experience on how she was forced to move between five different schools to achieve her GCSE’s because of physical bullying.

The Travellers’ Times Lisa Smith called for Gypsy Roma and Traveller History Month to be reinstated in schools and adequate funding attached. She said: “We have more than 600 years of rich cultural history and have made a huge contribution to society, but this is hugely ignored in the education system.”

She added that it would give young people a sense of pride in their identity and is proven to improve community cohesion in schools and local communities which is so important given that anti-Gypsism is increasingly being publicly displayed by politicians.

Sybil Lee, Romany Gypsy activist, highlighted the serious issues of Roma being excluded from schools at an alarming rate and noted the discrimination community members faced when trying to obtain car insurance and how in cases the cost was tripled for young people whose address was known by the insurer to be a Gypsy or Traveller site.

After the event Sybil Lee told Travellers’ Times: “It was inspirational to see so many young people under the age of 20 on the panel. Our youth are the future!”

Romany Gypsy author and activist Violet Cannon also noted she was "concerned with those who had insurance cancelled because the local authority site address was deemed temporary."

Violet Cannon then went on to highlight the serious actions of the former Secretary of State for Communities and Local Government, Eric Pickles, who was found to have breached both UK law and the European Convention of Human Rights with his controversial policy of recovering Traveller site appeals, and spoke of how this had impacted on her personally.

She added that, despite Eric Pickles being found to have discriminated against a racial group by subjecting planning applications from Gypsies and Travellers to special scrutiny, he was later given a knight hood in recognition of his services as an MP.

The Travellers’ Times was proud to be part of this platform at the ‘World Transformed’ conference hosted by the Labour grass roots Momentum and would like to thank Friends, Families and Travellers for organising it and inviting us.