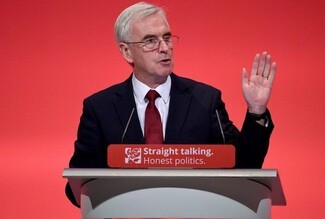 The Labour Party have made an appeal to Gypsy and Travellers in a social media clip seen by the Travellers’ Times.

In the video John McDonnell, the Shadow Chancellor and Jeremy Corbyn’s right hand man speaks directly to Gypsies and Travellers urging them to back Labour at the General Election on the 8th June.

Mr McDonnell highlights his and Jeremy Corbyn’s support for Gypsy and Traveller rights, citing their support for the Traveller Movement’s landmark discrimination case against Wetherspoon’s in 2011.

He goes on to say that “we need a Labour government that will stand up for equality and stand with the Traveller community” and specifically highlights the comments by the Conservative Councillor Nick Harrington (who has now resigned) aimed at Gypsies during the Eurovision Song Contest.

The clip has been praised by many Gypsies and Travellers on Facebook, and has already been shared widely. One Irish Traveller woman the Travellers’ Times spoke to, said the video was a “bold move” and added that “it was about time political parties started trying to appeal to Gypsies and Travellers as voters rather than using us in a negative way to get votes from the settled people”.

The video comes shortly after the manifesto commitment by the Labour Party to “end discrimination against Gypsy, Roma and Traveller communities, and protect the right to lead a nomadic way of life”.

The Traveller Movement-led campaign Operation Traveller Vote encourages Gypsies and Travellers to register to vote and engage in the political process. Although the voter registration deadline has passed you can find more information on how to vote on their website.