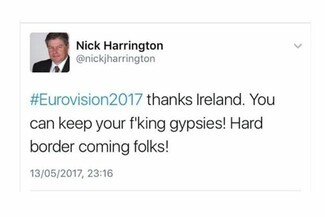 A Tory councillor and magistrate who landed in hot water after tweeting “racist” comments about Gypsies, Travellers and Irish people has apologised “to the travelling community” after a young Romany Gypsy wrote to him.

Nick Harrington has been temporarily kicked off Warwick District Council and has stood down as a magistrate after the expletive-ridden comment stunned social media users, Ireland and the Traveller community.

The tweet said: “#Eurovision2017 thanks Ireland. You can keep your f****** gypsies! Hard border coming folks!”

Ben Bennett, 13, a young Romany Gypsy campaigner and star of Ch5’S ‘Gypsy Kids’, wrote to Cllr Nick Harrington expressing his anger at the tweets and how the “racist comments impacts on my community.”

In an email seen by the Travellers Times, Nick Harrington replied to Ben Bennett saying he was “truly deeply sorry for the offence I have caused.”

The councillor added that he “never intended to insult the Travelling Community or people of Irish heritage,” and that he hoped that those he had offended “may eventually give me some forgiveness.”

Nick Harrington – who is under investigation by the police and the local Conservative party – also said that he was “cooperating fully with the Police and will accept whatever consequences come from my appalling behaviour.”

Speaking to the Travellers’ Times, Ben Bennett said that when he saw Cllr Nick Harrington’s “racist” tweet, he felt “disgusted”.

“I wanted to challenge him on his comments because I believe that people that make prejudiced comments are usually those who know nothing about the community they are commenting on,” said Ben Bennett.

“The apology email is a first step and now he should go forward and learn about the Gypsy and Traveller community and maybe he could lend his support to equality for everyone.”

Sherrie Smith, a Romany Gypsy rights campaigner and florist from Herts, reacted to Nick Harrington’s apology saying it was “too little, too late”.

“I am glad to see Cllr Harrington has apologised to Ben,” said Sherrie Smith.

“In my opinion, it is too little, too late. It is our children that suffer this Gypsy hate the most. Every time a public figure makes a racist comment – the prejudice at schools gets worse.”

A Tory councillor and magistrate who landed in hot water after tweeting “racist” comments about Gypsies, Travellers and Irish people has apologised “to the travelling community” after a young Romany Gypsy wrote to him.